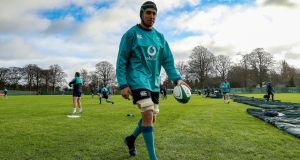 Ultan Dillane during Ireland training at Carton House in the build-up to the England Six nations opener. Photograph: Bryan Keane/Inpho 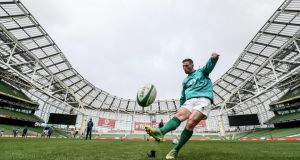 John Cooney practising his kicking during the Ireland captain’s run at the Aviva stadium ahead of the England game. Photograph: Dan Sheridan/Inpho

Ireland play nine Tests, five in the Six Nations and four warm-up games, ahead of this year’s World Cup in Japan. The priority for all those in contention is to get game time in the green jersey.

Players crave an opportunity to reinforce their credentials irrespective of whether it arises through merit-based selection or injury. Ireland coach Joe Schmidt selected a 38-man squad for the opening two matches in the Six Nations, outlining a loose pecking order but there is still scope to jostle for position, initially over the next seven weeks.

With a 31-man squad limit for the Rugby World Cup in Japan the competition for places is considerable.

In excellent form for his province he started Ireland’s last game of the November Test series against the USA, and as things stand is in a battle with Jack McGrath to understudy Ireland’s first-choice loosehead prop, Cian Healy. He didn’t play in Ireland’s 2018 Grand Slam but is handed first crack at claiming a jersey today.

He made a couple of appearances off the bench in last season’s Six Nations, started one of two matches he played in the summer series win over Australia, and scored a first try when coming on against the USA in the last of his 16 caps. At the moment he sits behind Tadhg Furlong and Andrew Porter but the likelihood is that three tighthead props will travel to Japan.

Called into the Ireland squad for the summer tour to Australia when captain, Rory Best was forced to withdraw through injury, he started two of the Tests and did likewise against Italy in Chicago and the USA. He’s been periodically unlucky with injury. When both were fit he has been chosen ahead of Seán Cronin and it promises to be a mighty tussle between them for the back-up role to Best.

The last of his 11 caps came against Fiji in November 2017, as injury, a loss of form and stiff competition relegated him to the outside looking in, having enjoyed a brilliant debut season at Test level in 2016. Schmidt chose him in the original 38-man squad but he has lost out to Quinn Roux for a place on the bench against England. And with the injured Tadhg Beirne and Iain Henderson due back, he desperately needs a chance in a green jersey.

He didn’t make the original Irish squad but was called up following injuries to Beirne and Henderson. Roux, who scored a try off the bench in the last of his eight caps, has won the battle for a place on the bench against England, an opportunity he’ll be keen to grasp, whatever minutes come his way today.

He’d be in a matchday 23 for most other countries but Ireland’s lavish backrow resources make it a ridiculously competitive area of the team. The quality of his performances for Leinster and Ireland are generally of a high grade but he may require an injury to open the door during the Six Nations.

Injuries to Luke McGrath and Kieran Marmion mean that he gets a chance to understudy Conor Murray but that’s only a starting point. Cooney needs significant minutes in a couple of big matches to advance his credentials and prove that he can thrive in the Test arena.

Is he a wing, a fullback or a centre? He can certainly play all three to a very high level as he has done in his brief international career to date but he needs to break through the glass ceiling and get into the matchday 23 on a regular basis. There’s no doubting his talent or aptitude but he needs game time in the Test arena.

Ten caps, five tries, a hat-trick in his last appearance and still he could find himself tussling with players like first-choice wings Keith Earls and Jacob Stockdale, Rob Kearney, Jordan Larmour, Will Addison, and now Robbie Henshaw with his relocation to fullback in a very cluttered race for back three positions and the number 23 jersey.