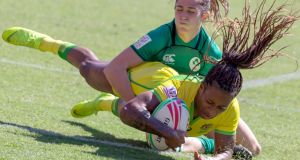 The Ireland Women’s Sevens fairytale journey in Sydney has ended in semi-final defeat, as they were beaten by defending champions and hosts Australia.

Anthony Eddy’s side had made history by reaching a maiden semi-final thanks to a 22-7 win over Spain.

However their hopes of going one better and securing an improbable final appearance were ended in the last-four, as they went down 24-12 at Spotless Stadium.

Three tries saw Australia race into a 19-0 half-time lead before Ireland fought back after the interval, with a brace of scores from the excellent Amee-Leigh Murphy-Crowe putting her side on the comeback trail.

But it wasn’t to be, with Ellia Green securing her hat-trick and Australia’s place in the final.

Ireland then went into the bronze medal match against the USA, and again found themselves 19-0 down at half-time.

They rallied with tries from Murphy-Crowe and Eve Higgins but were ultimately beaten 26-10.

New Zealand took the gold medal, after they thrashed Australia 34-10 in the final.

Wasps given all clear for Premiership final after latest Covid-19 tests 10:44
Man United’s latest Parisian party more impressive than heist of 2019 09:45
Lions to play Japan on home soil before tour to South Africa 09:26
Tiger Woods in the groove as he plots a path to Augusta 09:22
Underage and minor GAA could be stopped under Level 5 Covid-19 restrictions 08:53
Crossword Get access to over 6,000 interactive crosswords