Fullback to the drawing board for now with Robbie Henshaw

Johnny Watterson at the Aviva stadium

Ireland coach Joe Schmidt says England were more physical than Ireland as his side begin their Six Nations title defence with a 32-20 defeat. 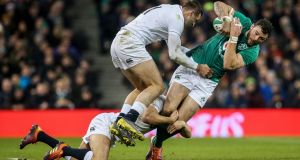 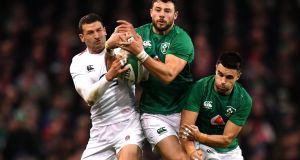 Ireland fullback Robbie Henshaw competes for the ball with England’s Jonny May during the Six Nations match at the Aviva stadium. Photograph: Dan Mullan/Getty Images

Monday morning quarterbacking. Joe Schmidt doesn’t have that luxury. When he selected Robbie Henshaw as fullback over Rob Kearney and Jordan Larmour, it was not having played there at international level since his debut against the USA and with just 62 minutes game time in his legs since October. It was a risk and a comment on where Kearney and Larmour currently sit in the coach’s thinking.

The post-match press conference was no place to hang out dirty linen and a cautious Schmidt declined to be critical about Henshaw. But the lack of experience in the position occasionally showed. As talented as the centre is, it is the characteristics that burn into a player only after hours of managing the fullback position that were not on view against England.

If the match stats say anything, it is that Ireland had more possession than England (51.2 per cent) but played most of the game (66 per cent) in the Irish half. In that breakdown Henshaw was a busy and willing fullback, although from early in the match some of his plays looked uncomfortable.

In the opening phases after England had scored their early try, Henshaw collided in a mistimed run forward for the first high ball.

On 14 minutes he took up the ball and went to ground and minutes later was scrambling back to tidy up a chip forward from England centre Henry Slade. The clear grass space was there for England to put the ball into and they did it with accuracy and regularity.

On 21 minutes Henshaw was again running the ball out of the Ireland half and had not yet kicked for relief. On 29 minutes he kicked his first ball to touch and soon after sliced with his left foot to touch.

It was from that field position that Elliot Daly flicked the ball through for Jack Nowell to chase and hassle Jacob Stockdale into a fumble for Daly to touch down. After the break as Ireland chased the match a high kick which Henshaw chased was again mistimed.

He was folding back again minutes later when Jonny May kicked and chased. As the match progressed Henshaw was more evidently pushing into offensive positions and on 63 minutes brilliantly jumped to tap back a high ball that was heading into touch.

If there was any one lasting image of the match, it was Ireland running the ball out and being heavily tackled inside their 22. Ireland under serious, sustained pressure pushing hard and England pushing harder. Sooner or later there would be friction burns and on 75 minutes Slade made it so with an intercept from Johnny Sexton to take the score to 13-32.

For all of Henshaw’s industry and hard work, and his enthusiasm for stepping up beside Bundee Aki and doing his share of cleaning out or stepping in as a pillar, there was a controlling factor missing. It was Stockdale, who previously said that when he played with Kearney at fullback, it was something of a revelation for him.

His marshalling of his wingers, his positional sense of where the ball was going and his ability to see fractures before they happened were all features of his game. They are the unseen skill sets of a fullback.

Kearney’s last game with Leinster against Scarlets was not one of his best and Schmidt came to the conclusion that he needed more game time to come back to being the commanding fullback he can be. The gamble was that Henshaw’s all-round excellent rugby skills would suffice.

What Henshaw didn’t have was the 86 Irish caps and three Lions caps, all or most of them playing at 15, that Kearney has in his possession. It’s a phenomenal cache of knowledge and experience that only over time instils an instinctive positional sense and an understanding of the backfield, which was a target for the England kickers – Ben Youngs, May and Owen Farrell.

“We overplayed because we couldn’t get into the aerial battle. They got access into our aerial battle,” said Schmidt after the match. “I thought Robbie did a pretty good job. Keith [Earls] was keen to run off the hip pointer but you can’t do that. Robbie almost had to double job. The volume of running he did I think he was as good as he could have been.”

The fullback debate will be an issue this week as Ireland realign for the Scottish threat in Edinburgh. Schmidt is not blind to the fact that Kearney also happens to be very good in the air. But the lot of the 32-year-old is that if he is not selected to start at 15 he won’t be in the matchday squad because players like Larmour and Andrew Conway are more versatile coming off the bench.

Because of his natural ability the Henshaw experiment at 15 may be far from over. But it also points out, with Scotland just five days away, that sometimes it is not enough just to be a fabulous footballer.