Six Nations: Stander and Ringrose set to start against France 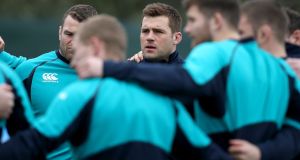 CJ Stander has recovered from the facial injury he sustained against England. Photograph: Dan Sheridan/Inpho

Ireland coach Joe Schmidt is expected to name 13 of the team that beat the All Blacks last November, with two significant additions in Conor Murray and Iain Henderson, to face France on Sunday at the Aviva stadium.

Besides Kieran Marmion and the injured Dev Toner, the starting XV that toppled the world champions is set to take the field.

Ringrose and Stander have been injured since the England defeat in Dublin on February 2nd.

This expected line-up means Seán O’Brien being sent back to Leinster last week, rather than train at national camp in Belfast, was an indication that Josh van der Flier would return at openside ahead of his provincial teammate.

Dan Leavy and Robbie Henshaw also featured in Belfast but neither man is deemed match fit. The same goes for Joey Carbery (hamstring) so Jack Carty or Ross Byrne will provide cover at outhalf on the bench for Johnny Sexton.

O’Brien and others could return to play Wales in Cardiff as a six day turnaround prompted Schmidt to keep a 37 strong squad in Carton House this week with a view to finishing a disappointing Six Nations on a high note.

The bench will be confirmed at lunchtime on Friday.