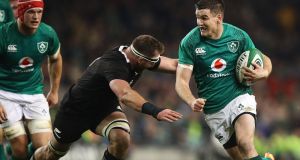 The system, quite clearly, is broken.

What’s blindingly obvious is the need to establish a global calendar before any World League and lucrative broadcast deal gets stitched into international rugby’s ill-conceived quilt.

The Six Nations is the only annual Test-match tournament that’s an established success. Rather than framing it as an insurmountable problem, how about making it the launch pad for a global season?

The players have spoken.

The powers-that-be are “out of touch” says Johnny Sexton, Kieran Read has no interest in a “money-driven, weakened competition” and Owen Farrell sees “no signs of improving this already difficult situation”.

The game will become “our pacific islanders against your pacific islanders” says the boycott-espousing Daniel Leo, while Georgian rugby president Gocha Svanidze sees only “snub-nosed retrograde officials” at the heart of the decision-making process.

In a scrambling response, World Rugby CEO Brett Gosper tweeted about “many inaccuracies” and promised “no Pacific shut out!” while his vice-chairman Agustín Pichot stressed that “the Guinness Six Nations may have a different view about the merits of promotion and relegation, but I am 100 per cent for it”.

Both their voices were drowned out amidst this week’s deafening din of rancour.

Time to listen. Perhaps Gosper might turn to Pichot and say, ‘The fault, dear Gus, is not in our stars, but in ourselves’.

The system is broken, see. The Six Nations, on their prime real estate, are keeping quiet (Wales, to be fair, have enough on their plate now the Ospreys have rebranded “Project Reset” as “Project Inept”).

So, all told, a disastrous week for the World Rugby executive with more bruising encounters promised on the road ahead.

Are they even in agreement among themselves?

If a united front existed it would have been presented before the players broke ranks, or at least in the immediate aftermath. That would have lessened incendiary reactions from the Pacific Islands and Georgia.

Rule number one of any public relations campaign is to establish your point of view. WR are still struggling badly in this regard.

Rule number two is to deliver persuasive communications. When the current World Player of the Year branded them “out of touch” the other rules became irrelevant. The battle is over.

My humble advice would be to regroup and avoid making the same mistakes all over again.

The nub of this issue is the absence of a global calendar.

An obvious remedy is to kick off international rugby – from Auckland to Tokyo, Cape Town to Dublin – on the same day every year

I don’t believe rugby necessarily needs a “World League” outside a World Cup year. Well, I know the Six Nations do not seek it. The Southern Hemisphere countries want it now more than ever. Tier two teams need more Test matches against tier one opposition. None of them, not Georgia not Fiji, can afford to be excluded.

The players were spot on. A World League only creates more problems than it solves. Every stakeholder not “out of touch” with our game can see that.

The best two teams on the planet playing over five consecutive weekends in November games is a bad idea. Everyone got that? It will damage the club game (for proof, see the aftermath of the Lions series and World Cup) and have a seriously negative impact on the most valuable asset of all: the player’s body.

Pichot is the key figure in all of this as he provides the link from player to politician. The game needs him to find a solution.

An obvious remedy is to kick off international rugby – from Auckland to Tokyo, Cape Town to Dublin – on the same day every year.

That first Saturday in February, finishing on the last weekend in November, would be the neatest package.

So many obstacles must be overcome. This can only happen with collective desire to fix a broken system.

I suggest starting in February because the Six Nations is not for budging. That’s a certainty. An aligned calendar also ends one obvious anomaly; beating the All Blacks at the end of November is not the same as beating them in July. Same goes for Ireland being exposed in late June, as I know from excruciating experience when togging for one last game 10 months into a gruelling season.

The World League, as currently proposed, can only cause more damage to players and exacerbate smaller issues.

WR are screaming from the rooftops that tier two nations will not be “shut out”. Fiji and Japan were belatedly added to Beaumont’s Dublin meeting later this month but excluding Mr Svanidze and others seems like a finger in the dike.

Daniel Leo’s stance is also spot on. If we want to see Samoans, Fijians and Tongans playing for their own country and not Ireland, New Zealand, England, Australia et al, then they must be exposed to top tier international matches in order to be spotted by European and Japanese clubs, which enables them to earn a good living from the game.

Of course, a global calendar does create additional problems as European club teams and Irish provinces decrease the number of foreign players on their roster to ensure the work at grass roots retains a clear pathway.

There are multiple facets to successfully interweaving Southern and Northern Hemisphere rugby. There can be no short cut and money alone will not solve these many problems, although it can destroy the sport we love.

In 2018, SANZAAR deemed the Pacific Super Rugby franchise based in Fiji to be “commercially unsustainable”. The problem? The new franchise couldn’t “deliver a commercial uplift in both broadcasting and guaranteed underwrite”.

That means Fijians – easily the best rugby players I’ve ever seen – will continue to flood into every other country.

The system is fractured in so many areas. Australia are desperately struggling to compete with other sports. Even New Zealand identifies multiple issues at underage up to elite player exodus.

The World League proposal, as seen by players, will not grow the game.

It will not fix a broken system. It only protects those safely inside the house.

The decision-makers simply must start listening to the athletes.

Maybe the World League is too lofty an idea. I sound like a GAA columnist here, but the calendar needs addressing before any other ailment gets cured.

What works? The Six Nations. These unions have no incentive to alter their current model or move from the traditional February and March slot. None whatsoever.

What doesn’t work? The Rugby Championship. For a number of reasons but mainly the All Blacks’ utter dominance. The weakened rand in South Africa is forcing Rassie Erasmus into a complete overhaul of the Springbok model.

This tells us that the Southern Hemisphere unions need to bend. They already play from January to November. Make that the starting point of a long overdue conversation. But it needs to come from them.

A major and perhaps insurmountable hurdle is the European club scene, namely the English Premiership and Top 14, which both need to retain their respective established slots, which currently require 26 weekends in France.

There are so many difficulties to tackle before a World League should even be considered.

The players have spoken, firmly and with clarity. Listen. Player welfare – reducing exposure to growing physicality – must top the list of priorities. Otherwise, we won’t have a game. We’ll have extremely profitable carnage.

Exhibit A: The NFL in the USA.

Speaking of the Six Nations, if a player was not training up in Belfast last week, it would be surprising to see him feature against France. Taking the example of Rob Kearney’s exclusion against England when he didn’t go attend the Portugal camp, Seán Cronin, Jack McGrath and Seán O’Brien will not feature on Sunday.

That would be a harsh on Cronin as the lineout continued to struggle in Rome when Niall Scannell arrived. Also, Ultan Dillane and Quinn Roux were sent back to Connacht.

Something needed to be done. Changes were inevitable after the Italy performance and there was always a plan, I presume, to freshen up Rory Best, James Ryan and Cian Healy at some juncture. There will be plenty more ins and outs with the six-day turnover before Wales in Cardiff.

The players know full well that reputation counts for ever less in the coming weeks and months. The best possible XV will be used against France and Wales. They will be different XVs. Injury and form will see to that.

Durability has become as important as any other factor when it comes to selection. It’s incomparable to my last few seasons as a professional (which ended when this column began in 2015).

All that matters is who can fully prepare to face France. Same applies next Monday morning. That’s how the job works in 2019. It brings us back to Johnny rubbishing the foolish idea of playing five Test matches in consecutive weeks.

That also tells me that only the will of players can fix this system.