Ben Te’o and Manu Tuilagi both start for England

The powerful carriers from Pacific Islands will start together against Italy 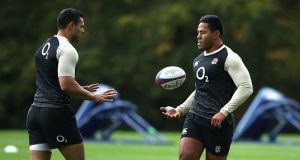 Manu Tuilagi and Ben Te’o start together in the centre against Italy. Photograph: David Rogers/Getty Images

Joe Cokanasiga will make his first Six Nations start for England, against Italy on Saturday, with Eddie Jones also pairing together Ben Te’o and Manu Tuilagi for the first time in a heavyweight midfield partnership.

Cokanasiga, 21, appeared off the bench against Wales last time out but will make his third start for England, having impressed in his first two Tests last autumn, scoring tries against Japan and Australia. He replaces Jack Nowell, who has been nursing a shoulder “stinger” suffered against Wales.

Jones’s decision to replace Henry Slade with Te’o, meanwhile, means England go into Saturday’s match with a 34-stone midfield pairing, backed up by Cokanasiga’s power on the wing. With Billy Vunipola again at No 8 it is arguably the most powerful XV Jones has selected in his tenure.

In total, the head coach has made five changes to the side that lost to Wales with Ellis Genge, Joe Launchbury and Brad Shields coming into the side, as well as Te’o and Cokanasiga. Te’o makes his first appearance of this year’s Six Nations, coming in at inside-centre with Tuilagi moving out to the No 13 jersey.

Jones, however, has opted against handing Dan Robson a start, with Ben Youngs continuing at scrumhalf. Owen Farrell again captains the side from outhalf with George Ford on the bench and Elliot Daly and Jonny May continuing at full-back and left wing respectively.

Up front, Genge makes only his fourth start at loosehead while Launchbury comes in for the injured Courtney Lawes. There is no place for Maro Itoje, who suffered a knee injury in training, delaying his comeback. Shields gets the nod for Mark Wilson at blindside flanker while Nathan Hughes is again on the bench, seemingly covering the second row.

“We have had a good preparation ahead of Italy with a great week in Oxford where we competed against Georgia for two days,” said Jones. “Players have had a good break and have come back into camp re-energised and refocused for what is an important game for us.

“Italy is a bit of an unknown quantity but when Conor [O’Shea, the head coach] allows them to play rugby they play well. They have played terrific games in the Six Nations. They are fitter, physically stay in the contest a lot longer and they are quite unpredictable in the way they attack. We expect Italy to throw the ball around a bit so we are going to have to defend very well against their unpredictability and when we have got the ball, we have to use it wisely.”

O’Shea has picked an Italy team for Saturday’s clash that he believes is capable of causing the greatest upset in Six Nations history.

The Azzurri have lost their last 20 matches in the Championship and have suffered defeat in all 24 previous meetings with England, statistics that have installed them as 60-1 underdogs to prevail this weekend.

O’Shea has made three changes to his starting XV for the Twickenham showdown, headlined by captain Sergio Parisse recovering from concussion to reclaim the number eight jersey. Sebastian Negri has recovered from illness to slot in at blindside flanker and Luca Bigi displaces the tired Leonardo Ghiraldini at hooker.

“This is an Italy team that’s preparing to win. Everybody thinks we’re delusional. But we’re sports people, we’re competitive people,” head coach O’Shea said. “I’ve said to the players I don’t want them to even think about the result, their job is to deliver a performance of intensity, physicality and ambition.

“I’ll say ambition 20 times because I want them to go out and play. I’ll take the flak for any results.”