Ringrose, Healy, Best, Ryan and Henderson all likely to start for Ireland against France 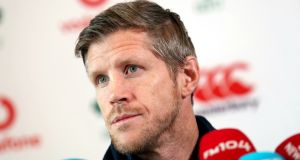 Simon Easterby: “We had long discussions involved in nearly every position. That process will continue but it’s great because we have more depth at the moment.” Photograph: Dan Sheridan/Inpho

Refreshed and replenished by the return of a host of players who were either rested or injured for the Italian game, the likelihood is that at least five of them, Garry Ringrose, Cian Healy, Rory Best, James Ryan and Iain Henderson, could well come back into the Irish starting XV for Sunday’s Guinness Six Nations meeting with France at the Aviva Stadium.

The likes of Tadhg Beirne, Jack Conan, Jordan Larmour and Andrew Conway have also come back into the mix after injury.

Assistant coach Simon Easterby admits this selection has been “very tough”, adding: “We had long discussions involved in nearly every position. That process will continue but it’s great because we have more depth at the moment. We’re still missing some key players and we’re still able to select a squad that we feel is right up there amongst the best and that’s the credit to what we’ve done over the last four years, credit to the provinces and the players.”

With Ross Byrne called up into the meaty 37-man squad in addition to Johnny Sexton, who trained fully, and Jack Carty, Easterby said that ala Robbie Henshaw and Dan Leavy, this game “might be just a little bit too soon” for Joey Carbery, whose hamstring injury ruled him out of the Rome game.

The most notable omission is Seán Cronin, after three of those five lost lineouts in his belated first Six Nations start in Rome occurred under his watch. He misses out behind Niall Scannell and Rob Herring as well as Best.

Meantime, the debate as to why Ireland’s form hasn’t scaled the heights of their annus mirabilis last year continues to rage, with All Blacks coach Steve Hansen mischievously saying they haven’t been able to cope with being viewed as the number one team in the world.

“For us that’s something we’ve been used to. We’ve been ranked the number one team for 112 months now I think, but people have seen Ireland as the top dog after they beat us, and that put a massive amount of expectation on the players and coaches.”

“Instead of being the hunters they are the hunted and it’s different. It’s different when you’re sitting at the top of the tree. It’s a different experience. Not many teams cope with it that well.”

“No, we don’t necessarily see it like that. Last year was an extraordinary year. We had a lot of things go our way, we made opportunities, we finished things and it was great to be part of.

“There’s always improvements that need to be made. Clearly, we’re there to be knocked off at the moment and it’s something that we need to deal with but it’s not something we’re getting overly worried about.”

Similarly, Easterby didn’t believe comparisons with the 2007 World Cup campaign, when he was in the team, were valid.

“I think we’re in a different place as a team. I think we failed in that World Cup for lots of different reasons and I think the World Cup in 2011 would have redressed a lot of those issues from 2007. It’s 12 years ago so I don’t think you can compare too much of it.”

As for this week, the three-day Belfast camp and the return of those front-liners has helped to revitalise the squad according to Easterby.

“Judging on today’s session, it was one of the best we’ve had for a good while. The Belfast camp was really good and we eradicated a few things we needed to improve on. This week we’ve hit the ground running, we’ve got fresh bodies and, so far, it’s been a really energised week.”

‘I want that gold medal’: Rhys McClenaghan talks Tokyo Olympic aspirations 07:02
Five Golf Classics for you to tee up at in 2020 06:00
Out of the shadows: Floodlights a priority for clubs across Ireland 06:00
AFL’s equalisation policies a possible guide for the GAA 06:00
Murphy confident Donegal remain on the right track 06:00
Here is your handy guide to sport on television this week