Joey Carbery ruled out of Ireland 23 for France encounter 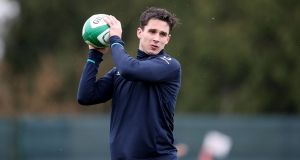 Joey Carbery will not make Ireland’s 23 for the penultimate Six Nations game against France on Sunday despite being named on Wednesday morning in an extended 37-man squad.

The Munster outhalf ran at the Irish team’s base in Kildare but is not far enough along in his rehabilitation to line out against France.

Carbery missed out on last month’s game against Italy and while the outhalf is making progress on his hamstring injury, Ireland will not risk him this weekend.

“Joey trained today and ran and conditioned pretty well. It might be just a little bit too soon for him,” said forwards coach Simon Easterby.

“Not being a medic, I’d say he’s unlikely to feature this week. He’s probably recovered quicker than we expected but if he is 50-50, you wouldn’t play a player. We have to make sure we’re in a better position than that.”

Easterby added that Seán Cronin is far from the forgotten man after the Leinster hooker was left out by Joe Schmidt on Wednesday. Cronin, who has 68 caps, started a Six Nations game for the first time against Italy in Rome but was replaced by Niall Scannell after 54 minutes as the Irish lineout misfired.

Ulster’s Rob Herring has been drafted into the squad as a third hooker alongside Scannell and captain, Rory Best.

“Possibly,” said Easterby when it was put to him that Cronin was the fall guy for a poor Irish lineout. “But it’s a specialist position that we need to build depth in. He’s had a lot of rugby coming into this, played really well for Leinster and performed well with us.

“We know a lot about him as a person, him as a player and we need to know a little bit more about a couple of the other guys that we brought in. I guess we’re looking continually to build some depth in positions.

“Seán has been involved in the first three games. He has started in Italy, and in a specialist position like hooker, probably only nine and maybe 10 as well where you don’t get guys playing other positions. We’re just looking to continually build some depth and find out a bit more about players that we need to work with towards what’s coming up in the next couple of weeks and the end of the year.”

Easterby also suggested that centre Robbie Henshaw and flanker Dan Leavy may not make it back for Ireland’s final championship match against Wales in Cardiff on Saturday week. Henshaw suffered a dead leg against England in Ireland’s opening match and Leavy has struggled with a calf injury.

“Again it’s about making sure they’re right and ready to play and not compromising their return,” explained Easterby.

“It may well be that they don’t feature but we will assess that as we go along this week and then with the short turnaround the week after, it would be great if we could have some fresh bodies coming back in, but it might be too soon for both of them.”