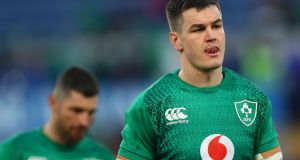 Johnny Sexton has said proposals for a rugby World League are ‘out of touch.’ Photograph: James Crombie/Inpho

Ireland’s Johnny Sexton has said reported plans for a new rugby World League to be launched in 2020 are “out of touch,” and potentially harmful to player welfare.

New Zealand media reported on Thursday that World Rugby was considering introducing the new competition in 2020, which would involve the existing sides from the Six Nations, with Japan and the United States also joining the southern hemisphere’s Rugby Championship.

The reported format would see the teams playing each other once in a year and culminate in semi-finals and a final in the northern hemisphere in early December.

The World League would not be held during World Cup years and would not feature promotion or relegation, ending the hopes of emerging European sides like Georgia, Russia and Romania as well as the Pacific Island nations of Fiji, Samoa and Tonga of getting more regular competition against Tier One nations.

And Sexton, who is President of the International Rugby Players organisation, has highlighted a number of concerns with the new proposed tournament.

He said: “While players gave this idea a cautious welcome when we met at the end of last year, it now seems like a commercial deal on the future of the game is being negotiated at a rapid pace with little consideration given to the important points we raised with World Rugby in November.

“The issue of player load has never been so topical, however needs to be properly understood. To suggest that players can play five incredibly high-level test matches in consecutive weeks in November, is out of touch and shows little understanding of the physical strain this brings”

According to reports in the NZ Herald, an unnamed broadcaster has already tabled a proposal for the television rights, which would be worth about an additional €7-8.5million for each country.

Sexton’s views have been echoed by All Blacks captain Kieran Read, who said in a statement: “After listening to the issues raised by many of the players, we need to be very careful that we balance the commercial needs of the game, with the player welfare needs and ensure the quality and integrity of matches meets expectations.

“Fans want to see meaningful games; they don’t want to see fatigued players playing a reduced quality of rugby as part of a money-driven, weakened competition that doesn’t work for the players or clubs.

“With new technologies, new broadcast deals and new money coming into the sport, this is a crucial moment for rugby and one that many players are generally excited about. However, we have to make sure that the integrity of the game and welfare of the players is protected.”

Meanwhile England captain Owen Farrell said: “Players are definitely open to discussing a new global season, but what we develop has to work with the club game in order to reduce conflict, deal with player release issues and make sure their welfare is looked after.

“The proposal presented to us at the moment doesn’t seem to have considered this properly and shows no signs of improving this already difficult situation.”

The new competition would not include relegation or promotion, meaning emerging European nations like Georgia, Romania and Russia and Pacific Island sides Fiji, Tonga, and Samoa, would be excluded.

And the head of the Pacific Islanders players’ union believes it could prove the death knell for their sides.

Speaking to Stuff.NZ, Aayden Clarke said: “I’ve been in discussions with the three CEOs (of the Pacific islands) and we talked about the impact of this and one of them straight out said that ‘this will be death of Pacific Island Rugby.

“Another discussion indicated that ‘we might as well start playing league’. It’s going to have a huge impact.”

1 David Clifford sends everyone back to their corners unbeaten
2 Six Nations: Ireland are contenders but England still the team to beat
3 Mike Catt hopes to have Irish backs purring in Six Nations
4 Murphy’s law as Irish umpire endures the wrath of irate professionals
5 Owen Doyle: Creeping professionalism of schools rugby a threat to the game
Real news has value SUBSCRIBE