CJ Stander comes through the pain barrier to return for Ireland 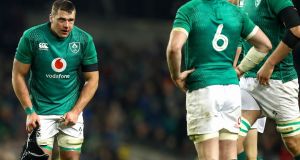 CJ Stander suffered fractures to his cheekbone and eye socket with his first carry in the Six Nations opener against England. Photograph: James Crombie/Inpho

CJ Stander has confirmed that he suffered fractures to his cheekbone and eye socket with his first carry in the Six Nations opener against England, but continued to play for over an hour. Then again, he’s made of resolute South African farming stock, and reckons he suffered a worse injury as a six-year-old when his dad reversed into him in a pick-up truck, which nonetheless didn’t prevent him attending school the next day.

He even made light of the injury he suffered against England, rating it no more than a one or two out of ten on his pain threshold after a recent succession of broken noses.

“It didn’t really feel like anything. A few times before this game, I would carry and I would get a good tackle in or someone would tackle me and my insides would be in my cheek. So out of 10 this probably felt like a one or a two. It just felt like a normal face hit.”

The incident on the farm was, he says, “worse than this”.

“I was six man, so I was trying to be funny [cheeky]. My dad was reversing and I kept running after him and I missed the step,” he says, recalling the farming incident.

“My dad was going to feed the calves. Me and my cousin [Stefan Louw] were on the farm and he was like ‘your dad is going to leave us’ and I was six and he was about 15. We ran after my dad. There was this narrow field so you could just reverse back and he couldn’t see us. We jumped on.”

“He [his cousin] was fine, but I missed the step and fell underneath and I hit my head on the ball-joint, where the trailer hitches on and then I just remember my dad grabbing me from underneath and saying ‘what are you doing?’ And I was like ‘sorry about that’. I had a scar and I went to school on the Monday morning. That was a Sunday evening. That’s what happens on a farm. Me and my younger brother were loose on the farm so we got used to those hits early.”

That was on a Sunday evening, and he was in school the next morning. Being impervious to pain is something he has taken into his rugby, and his love of collisions.

“I like running into someone and getting a good hit. It’s a personal battle every time you run onto a pitch and when you get a good hit sometimes you go ‘that’s a good f***ing hit man’ and I can’t wait for the next one to get someone else back. There’s a feeling I get from carrying and tackling. I think all of us do. It’s a physical game and things can happen. We all love that feeling. It’s a good feeling, a bit of tingling in your stomach when you get a hit.”

Confirming the extent of the injury he suffered against England, Stander maintained: “It wasn’t really that sore. I thought it was a nose break when it happened. My nose has broken probably six times since December so I thought it was just normal and kept on playing. I blew my nose just after half-time and I could feel this little bump.”

The worst part of it was I couldn’t eat for two weeks. I was just having soft food and using protein shakes and things like that.

“I think when you wear a scrum cap, you’ve got a bit of tunnel vision and I couldn’t really feel anything. When the doc told me to get off, I took it off and it felt like my cheek was sitting in the wrong spot. It wasn’t really sore. It just went numb. I’ve severed a nerve earlier, about four years ago, going down from my eyebrow to my teeth so there would be numbness anyway. That just flared up again so I couldn’t really feel anything anyway.”

“The worst part of it was I couldn’t eat for two weeks. I was just having soft food and using protein shakes and things like that. Ruth [Wood-Martin, the IRFU’s performance nutritionist] looked after me well. I can’t really make food anyway so it was easy.”

Relatively indestructible indeed. Until being sidelined for Murrayfield and Rome, since making his debut against Wales in the Six Nations opener in February 2016, Stander has only missed one frontline international, namely the second Test in South Africa due to his one-match suspension. He had been an ever present in three successive Six Nations campaigns.

Back in harness for Sunday’s Six Nations meeting with France at the Aviva Stadium, he has been refreshed mentally by the enforced four-week break, which initially also allowed to work on his speed and footwork.

“For me personally, it’s unreal to be back here. When you’re here you take it for granted, but if you’re not you say ‘oh, man, it’s a great place to be’. I walked in, everyone was in top form. We had a good week in Belfast again and this week so far has been great.”

“The important thing is we believe in our abilities, we believe in the players’ abilities around us and what they can do. I remember playing golf with Dougie Howlett a few years ago and he said ‘pressure is for tyres’. I laughed at it. It’s such an old, saying but being out now for the last few weeks I just want to come back and put my hand up and be selected and play and enjoy this game. Because you don’t know when it’s going to be over or whether you’re going to play another 100 games.”

“But enjoy the moment we have, the game we have and the team coming up against us and playing in one of the best competitions I think out there, for sure.”