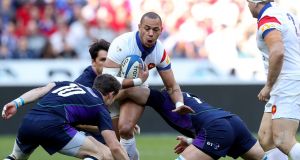 France’s Gael Fickou in action during the victory over Scotland. “I know that our fans are also very critical, it’s normal. Their disappointment, I understand it. I share it.” Photograph: Billy Stickland/Inpho

Jacques Brunel will never want for advice, the French coach inundated with suggestions from sundry sources including ex-players, media and supporters.

It ranges from immediately restoring Wesley Fofana – he played for Clermont Auvergne at the weekend – to the midfield, persevering with or indeed increasing the number of young players within the squad, to providing an immediate recall for Teddy Thomas, who scored of a hat-trick of tries for Racing 92 at the weekend.

The 25-year-old Thomas, playing in his second game back after injury, was hugely impressive but the good news for Ireland supporters ahead of Sunday’s Six Nations Championship match at the Aviva Stadium (3.0) is that Brunel didn’t invite him to rejoin the French squad at their training base in the southern Paris suburb, Marcoussis.

The French coach did call-up Toulouse scrumhalf Sebastien Bezy – he joins club-mate Antoine Dupont, superb against the Scots, and Baptiste Serin in the fight for the number nine jersey – and Racing 92 tighthead Cedate Gomes Sa to the squad.

Bezy replaces Clermont Auvergne’s Morgan Parra who pulled out of Clermont’s match at the weekend with a thigh injury while Gomes Sa takes the place of New Zealand-born colossus Uini Atonio. Parra had been dropped from the match-day 23 for France’s victory over Scotland while Atonio hasn’t played since the opening match of the tournament against Wales after sustaining a knee injury.

France played beautifully in the opening 40 minutes against Wales before going on to lose a game they literally threw away. Abject in defeat to England, they managed a partial atonement in beating an injury-hit Scotland the last time out.

That’s an overview of their Six Nations to date but beneath the surface of results lies even more perplexing performance issues that appear to emanate from selection; specifically the composition of the backline.

Maxime Medard started at fullback against Wales, wasn’t in the 23 against England and came back onto the bench for the Scottish game. Yoann Huget has played wing, fullback and wing in three games.

Fofana and Romain Ntamack started in the centre against Wales, Mathieu Bastareaud and Geoffrey Doumayrou played there against England while Gael Fickou, whose previous two selections were on the bench and the left wing in the aforementioned matches, partnered Bastareaud in midfield against the Scots.

Parra and Camille Lopez were the halfbacks for the first two matches but then dropped from the match-day 23 for the win over Scotland when Dupont and Ntamack wore the nine and 10 jerseys respectively. Damien Penaud is the only one to play in the same position, right wing, in the French backline in the three Six Nations games to date.

An injury and a suspension offer a partial explanation for a couple of enforced changes but the number of alterations is head-spinning. It fuels the criticism of those who claim Brunel is not sure of his best backline in personnel terms and where those pieces fit in the human jigsaw.

If the outside perception is that the French squad and coaching team are in a state of chassis it’s not one that those constituents are willing to wear. In an interview in Midi Olympique, Fickou argued that the external criticism hasn’t been allowed to permeate the squad and how the victory over Scotland is a timely fillip in morale terms for what he acknowledges will be a tougher assignment against Ireland.

“It is an important step. In recent times we could not win. It had been a long time since we had played in a full stadium, in front of our fans. It feels good to feel supported in difficult times.”

He spoke of the confidence that had been gleaned from the result and aspects of the performance.

Fickou was forthright when asked about which aspect of the criticism that annoyed him most.

“I’ll give you an example, the media questioned Guilhem Guirado’s captaincy. Only in the group, no one has ever thought of another captain than him. No way. He’s an exemplary guy, he’s our leader.

“He has a huge heart. He is the one who is best able to play this role in our group. We need him; he gives strength and confidence to everyone. For me, this kind of criticism is not justified. There was no foundation on this subject.”

Fickou’s not naïve and understands that some of the flak is justified.

“I know that our fans are also very critical, it’s normal. Their disappointment, I understand it. I share it. We are judged permanently. If we do not accept it, we are dead. We listen and bury ourselves? No, you have to bounce back.

“If we do not believe in ourselves, who will? With the staff, we are alone. Journalists, critics, that’s part of the game, our everyday environment. We have to live with it. In life, some people sometimes have trouble paying bills, eating properly. We must rationalise [that] there will be better days.”

Rather than suffocate under the pressure of external opinion he wants the playing group to harness it as a fuel and drive forward on Sunday in Dublin in a continuation of where they left off against the Scots.

The French team to play Ireland is expected to be announced on Tuesday morning.

Jacob Stockdale on dealing with online abuse; Seán Moran reminisces about what we’re missing 06:52
Red card replacements among new laws in New Zealand 06:17
Seán Moran: Summer’s mosaic slips away one small tile at a time 06:00
Jacob Stockdale gives keyboard warriors the slip in textbook fashion 06:28
Ryan Wylie finds the real meaning of team on the front line 06:41
Here is your handy guide to sport on television this week