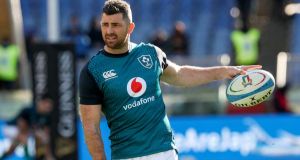 Rob Kearney: “We probably were a little bit broken after the English game but I think that’s understandable and you’d expect that.” Photograph: Billy Stickland/Inpho

The Ireland players need to step away from the carousel of matches and clear their heads, focusing on the 80 minutes against France next Sunday at the Aviva Stadium as a single entity.

Thoughts regarding what’s gone before and the ramifications for the future have to be put aside; that’s not easy but essential as they go in pursuit of a third successive victory.

Joe Schmidt’s side have misplaced the form which they carried into the tournament and are now trying to find it again, unsure of where it might be. Injuries and the ensuing turnover in personnel have been a significant factor in partially explaining the fitful nature of their performances in the Six Nations Championship to date. But at the weekend Ireland should be closer to full strength.

There’s no doubt that the nature of the defeat to England spooked the players a little bit, something to which Schmidt has alluded, but the mourning period has to be curtailed sooner rather than later.

Rob Kearney, who will win a 90th cap for Ireland this weekend, made the point about the timeframe that has elapsed since that opening weekend defeat and how it can’t, from the team’s perspective, be allowed to continue to cast a pall over the tournament.

“We’ve got to move on in this competition; that English game was round one, we’re moving into round four now. It’s time we put it past us.

“We probably were a little bit broken after the English game but I think that’s understandable and you’d expect that. What you would also expect and hope for is that the game the following week that you’d make up for it and you’d come out and you’d produce the game ideally that you would have liked to play the week before.

“I think deep down we all realise that sometimes it’s quite easy to get immersed in this little rut that you can be in. You start to listen a bit to outside pressures, a little bit of noise and everything that goes on.

“The coaches have been good at that over the last week highlighting and I suppose reassuring us [about] the team we are and what we’ve achieved over the last 12 months. You don’t lose that overnight; it’s just a matter of how we can find it.”

There is no doubt confidence can be a fickle bedfellow. Kearney argued that players aren’t impervious to self doubt.

“You put a guy out on the field in front of 80,000 people, another few million people watching at home on TV, and you make a mistake, it will have that effect on anybody.”

The key is coping and he pointed out that being given the tools through working with sports psychologists and using other mechanisms is important in seeking to banish negative thoughts.”

In a week in which a World League in some form or another has been mooted, Kearney expressed his reservations specifically in relation to player welfare.

“It’s the amount of travel, it’s the amount of games back to back on a weekly basis; for smaller countries like us with a smaller playing pool, it becomes very, very difficult and player welfare has to be very high up on that list.

“And all the messages that have come from the players are all about player welfare as opposed to anything financial about it. There hasn’t been a clear plan sent back yet, there’s been no structure that they’ve sent back and said categorically this is exactly what’s going to happen.

“So it’s all quite up in the air at the moment, but in the current format that has been spoken and suggested, it doesn’t really work for the players.”

Of more immediate import is the game against France. He knows that Sunday’s visitors will “sniff a little bit of blood” based on Ireland’s performances to date and highlighted the confidence that the French players will glean, retained en bloc, as a team and replacements from their victory over Scotland.

Ireland will seek to rediscover a swagger to their patterns, to project positivity in their demeanour but that is deed-led.

“We have got to step up and make some big plays and then that encourages other guys. We do try to energise each other, make each other feel really good, look really good by doing your own things off the ball. That might take a little bit of pressure off the guy outside you.

“So, it probably can be something that’s manufactured but we have got to give each other stuff to cheer about.”