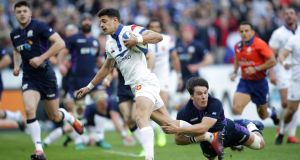 Ireland’s next opponents on Sunday (kick-off 3pm) in the 2019 Six Nations arrive in such a new-found sense of relative contentment that not alone has Jacques Brunel named an unchanged side for the first time in his 14-game tenure as head coach, but this is the first occasion Les Bleus have named the same team for consecutive Tests since 2012.

Remarkably, not since the Six Nations games at home to Ireland, a rearranged match which ended 17-17, and a 22-24 defeat at the Stade France a week later against England in March 2012, have the French played an unchanged side.

That was in the early stages of Philippe Saint-André’s troubled reign as French head coach but now, in the aftermath of the restorative 27-10 win over Scotland in Paris last Saturday week, they have finally done so again.

Despite scoring a hat-trick on his return from injury last Saturday in Racing’s 50-14 win at home to La Rochelle, Teddy Thomas was not called into the squad at their Marcoussis base this week.

Similarly, Brunel and his assistants have also resisted the temptation to restore Wesley Fofana after his return from injury in Clermont’s 52-17 win over Lyon last weekend.

Brunel had made six changes in response to the opening night defeat at home by Wales, after leading 16-0 at half-time, and another four changes and three positional switches in a revamped backline after the 44-8 loss against England at Twickenham.

Now, fully 76 games since that England match in 2012, and having stumbled upon/struck upon (dilute to taste) a more balanced and winning formula against Scotland – largely by dint of restoring players to their specialised positions – Brunel has kept faith with the entire 23 on duty last Saturday week in Paris.

“This was logical given the relatively pleasing performance against Scotland after a disappointing showing against England,” said Brunel.

Brunel has availed of Toulouse’s rejuvenation this season by investing in a core of young backs from the French club, namely 22-year-old scrumhalf Antoine Dupont, the 19-year-old Roman Ntamack, who made his first Test start at outhalf in his third cap against Scotland, and 23-year-old fullback Thomas Ramos, who made his full international debut in that game, as well as relative veteran Yoann Huget.

Ramos created the first try with a daring counterattack from inside his own 22 and then provided the try-scoring pass for Ntamack.

“They are all progressing nicely in my eyes,” added Brunel.

“They were excellent attacking and very calm in defence against the Scots. Sunday is obviously another level of a challenge. But if the scrum puts them in strong positions like they did against Scotland then they will be able to show how good they are in attack.”

The Toulouse-infused backline are also encouraged to play the same brand of heads-up rugby that has carried the club to first place in the Top 14.

“Given the presence of the likes of Ntamack, Huget and Dupont that is undeniable and is the type of spirit we want imbued in the squad,” said Brunel. “That spirit is to create something which rattles the adversary. We saw this with the try created by Thomas Ramos against Scotland.”

In the last seven years no combination has underlined the instability of the French selection policy, such as it is, than half-back. Under Saint-André, France used 17 different half-back combinations in his 45 matches in charge (winning 20).

Under Guy Novès, there were seven different ‘9/10’ partnerships in his 21 Tests at the helm (seven wins), while the young Toulouse pairing of Dupont/Ntamack are the seventh pairing of Brunel’s tenure.

The livewire Dupont, such a lethal runner, linkman and support player in broken play in addition to his basic scrumhalf skills, and Ntamack clicked against the Scots although, ironically, they had never previously started at half-back together for Toulouse. Indeed, Ntamack has only started three games at outhalf for his club this season.

Otherwise he has played at inside centre, the position he played in France’s first ever Under-20 World Championship success last summer save for one game at outhalf in their opening win over Ireland. Inside centre is also where he played against Leinster in the sides’ two Heineken Champions Cup meetings this season.

Brunel has noted Ireland’s relative struggles to date in losing to England before the hard-earned wins over Scotland and Italy, but clearly expects an improved showing on Sunday.

“We know the Irish characteristics, they love possession of the ball and putting together long phases of attacks; wearing one down. We have seen they have been shaky against England and even Italy gave them problems. However, they remain a strong rugby nation and they are bolstered by having confidence in their style of play. That quality they have not lost.”

Baptiste Serin and Anthony Belleau remain the half-back understudies, instead of the injured Morgan Parra and his club teammate Camille Lopez, both of whom had been critical of France’s preparations, and despite Lopez also starring for Clermont against Lyon.

“Today it is obvious that the squad selected is the one that will go to the World Cup,” said Brunel, with others such as Thomas needing to prove their fitness in order to come back in.