Murray’s quest for mint condition continues on to French contest

John O'Sullivan at the Stadio Olimpico 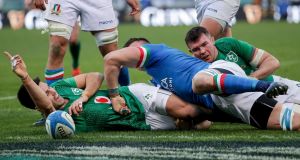 It felt like a horrible intrusion watching Conor Murray initially struggle to stay afloat beneath a riptide of errors, a brilliant scrumhalf looking to escape the torpor of previous performances in this season’s Six Nations Championship.

His dip in form has coincided by a troubled opening to the tournament for this Ireland team, predicated on the previous 18 months’ form, looking oddly disjointed at times in their patterns, struggling not to drown amid the welter of mistakes. The quality was fitful but rescued to a degree by the bonus-point victory.

In ideal circumstances the Munster scrumhalf would have shaken off the flecks of rust in the opening throes of the contest of the Stadio Olimpico, his playing equilibrium restored, if not back to his imperious best then a better approximation, but instead he succumbed to what felt like a continuation in performances terms of Twickenham and the Aviva Stadium.

His first box-kick in the first minute was innocuous, drifting too far to negate any possibility of a successful chase in being able to contest the high ball. Seconds later, as Ireland counter-attacked he threw a pass behind Jacob Stockdale and into touch and then as he reached for a pass from Sean O’Brien watched in slip from his finger-tips and hit the grass.

The trajectory wasn’t ideal but on another day it would have stuck. Those moments as an augury didn’t look promising but adversity reveals character and while the 29-year-old’s is not in question, he’d dearly like an upturn in fortune. It’s not as if he’s lacking effort or shrivelling under pressure; he’s looking to escape the rut.

There were times when the Irish ball carrier was isolated or the clearing out wasn’t accurate, facets that complicate the life of a scrumhalf. On 11 minutes he offered a reprise of what’s capable, whipping the ball away, through 19 phases, picking his passes intelligently, a sequence that ultimately pre-empted Quinn Roux’s try.

It should have been a point from which to kick on but a snowballing error-rate meant that individually and collectively Ireland lacked cohesion. Ireland would go through several phases, getting the continuity they craved and it would all come asunder with another mistake, occasionally careless.

The Italians were aggressive and physical in the collisions, and that caused the visitors several issues at the breakdown with the knock-on effect that Murray had to go clambering into rucks to secure possession or on a couple of occasions effect clear-outs to try to rescue the carrier. He was also used as a first receiver occasionally as the team sought solutions.

On 38 minutes, Ireland looked odds-on to score a try but Italian scrumhalf Tito Tebaldi came through a ruck several metres from his line, ripped the ball from Murray’s grasp and less than 30 seconds later, Ireland are standing behind their posts having conceded a try.

Murray felt that Tebaldi should have been penalised but the replays suggested otherwise. In tracking the Ireland scrumhalf it was instructive to note the number of occasions he acted as a shooter in the defensive line, chasing intercepts, albeit that none came to fruition. As a gambit it was in marked contrast to Ireland’s sedentary line speed for large tranches of the game.

Ireland coach Joe Schmidt challenged his players at the interval and certainly elicited a response from the Ireland scrumhalf. His first box-kick after the interval was contestable; he spotted a gap in the fringe defence and made a half-break before offloading to the supporting Tadhg Furlong.

It must have lightened his mood, his body language more assured, a bounce visible in his step. Murray took over the kicking duties posting the conversion for Earls’ try and then on 66 minutes did something that has been fundamental to his game.

As the Ireland lineout maul looked like being halted, he broke from the back and powered through a couple of tacklers to touch down, tagging on the conversion to boot. It was the 14th try of his Ireland career in his 70th cap.

It was virtually his last involvement in the game, John Cooney was summoned on 70 minutes from furious activity on the warm-up bike; the replacement scrumhalf was on it so long and pedalling so fast he could possibly have completed a stage of the Giro d’Italia.

Schmidt spoke in the aftermath of the game about his scrumhalf trying to fight through the frustration of a game that’s out of kilter. Murray started poorly but the graph climbed as the game wore on but that benchmark of excellence for which he was synonymous is still some way off in the distance. That quest will continue against France. The search goes on.