Jordi Murphy amazed at just how quickly things can change 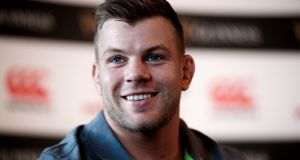 Jordi Murphy: “We are just very lucky in Ireland to be blessed with quite a lot of depth in the backrow”

“It’s been a strange two weeks. Very different environments. I just got a call on Monday from Joe, saying [Barbarians coach] Robbie Deans was on looking for a backrow. I had the week off so I said, ‘Definitely, I’d love to.’

“Went down and met some very interesting characters. It was a good week. The weather at the end of it wasn’t ideal to play a bit of Baabaas-champagne rugby but it was a good experience.

“I always dreamed of playing for the Barbarians growing up, so it was great to get the opportunity.”

Which environment is more craic, the Baabaas on tour or Schmidt laboratory?

“I’d be lying if I said the Baabaas wasn’t more craic.”

“Definitely. It was just great to integrate with guys from the Southern Hemisphere, and with some who are up in Japan. I was asking Ruan Smith, one of the boys, two days before the game ‘This is so strange for me, it’s so relaxed.’

“We had maybe two or three moves and we were trying to come up with funny penalty moves and things, and we had four lineouts that we could call on the day, and he was just saying it’s one of those things, it’s no pressure rugby, but when you come you have to turn up.

“It’s the Barbarians at the end of the day, and nobody wants to lose in that jersey, so it’s one of those things, very relaxed at the start of the week and then it starts toning up and toning up, and when you get the opportunity you just have to bring it.”

Last time Murphy prepared in such a chilled manner he was pack leader facilitating Andrew Conway’s ridiculous try-scoring talent out the back.

“Yeah, Blackrock under-20s, maybe, my first year out of school, so it’s been a while. And I wouldn’t want to be doing it every week, but it was nice for a bit of a change.”

The old pals have never been selected together for Ireland, until now. That match at a sodden Thomond Park against Tonga provided a valuable 80 minutes for the openside who faces Fiji on Saturday evening. Josh van der Flier just had ankle surgery, Dan Leavy and Tommy O’Donnell were damaged at training recently, so Murphy returns from his nightmare year.

“Dark times, but I was surrounded by good people.”

History will always mark J Murphy as the try-scoring number 7 on the Ireland team that beat the All Blacks at Soldier Field, Chicago, in November 2016.

Schmidt trusted him over van der Flier and even left O’Brien at home. His knee snapped after 25 minutes.

“It took me a couple of weeks to get my head around it. The injury is done now, I am past it, so I can look back on being part of a great day in Irish rugby history.

The injured flanker is instantly banished from the public’s mind. Not by Leinster, who keep their wounded under close watch for early UCD sessions, and have them sitting in the RDS on game day.

Now comes cap number 18 since his debut at Twickenham in 2014. Minutes are everything in the management of these thoroughbreds nowadays.

“It was good to get my minutes up,” he said of clocking up 452 this season. “I got a heads up on the Tuesday or Wednesday last week that a few lads had got knocks and I would be coming in on the Sunday for this week. So I had one eye on that.

“Last time I played for Ireland was in Chicago, so it’s been quite a while. I’m just looking forward to the opportunity, trying to make it my own. Bring what I can bring to a pretty young, inexperienced but exciting team.”

The current pecking order at openside in Irish rugby is currently: O’Brien then Murphy then Ulster Aucklander Sean Reidy, who was capped against Japan in June.

At 26 now, Murphy gets the magnitude of this opportunity in an all-blue backrow as Rhys Ruddock captains from blindside and Jack Conan gets his latest chance at number eight (CJ Stander is on the bench).

“Sure I wasn’t in the squad last week. Just shows how things can change. The game is attritional. We are just very lucky in Ireland to be blessed with quite a lot of depth in the backrow. Hopefully I can push on into plans for next week [against Argentina] and later on in the season.”