Playful Fiji plan to do damage at the Aviva 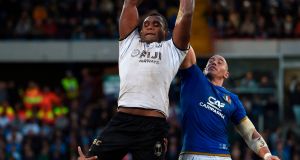 Stradbrook on a Thursday, and a corner of the clubhouse is teeming with life. This afternoon the big gates into the Blackrock rugby grounds are closed to gawkers. But there is a thrum, a concentrated buzz of activity.

At the front of the pavilion the Fijian players go through their stretching and passing, a few fabulously tattooed bodies hanging over the fence surrounding the pitch.

Big lively lads, smiling, chucking balls to each other and playing kicking games using the upright of the near goal posts. You push him just as he’s kicking, right?

Ireland’s training pitch at Carton House is a hermetically sealed laboratory, a counter point to this vision of glasnost. The wonder is that behind the great screens of Co Kildare do the local islanders lark around like the ones from the South Seas?

Fiji have arrived, and there is a gladdening noise, players carved from teak and chattering in a musical language that sounds like chirping birds.

Nemani Nadolo, a 20 stone, 6ft 5in , smiling gargantuan. Leone Nakarawa, the right lock, just as tall. Winger Timoci Nagusa, smaller but do his feet ever touch the ground when he runs?

“Look, I think we’re in a really good place,” says coach John McKee. You may remember him from Connacht, oh, way back.

“In terms of the Pacific, we’ve got the critical mass of population with nearly a million people in Fiji. Strong domestic competition, strong schools competition. We’ve got lots of good, young talented players coming into our programmes. For the Pacific or tier-two nations, our sponsorship is actually at quite a healthy level.”

There is a playfulness and joy around the players. Deeply spiritual, they come to Ireland with Olympic Sevens gold from Rio 2016. It was the first medal the country ever won at an Olympic Games and has changed them.

“I certainly think it’s brought about a little shift in the ambition whereas before, maybe, it was more ‘we’ll try our best and see how we can go’,” says McKee.

“Whereas now there is more of a mental resolve and the belief that, yes, we can compete at the highest level. If we put in the hard work then we can achieve great things.”

Ben Ryan told a story in 2013 about his first week coaching the Fijian Sevens team. The union went bust and they told him he was not going to get paid for six months.

In addition, his star player had not turned up for training. So he called around. The player was lying on the floor saying that his legs had been cursed, that he couldn’t play. And how wonderful is that.

“We have got high aspirations of how we want to perform at the next World Cup,” says McKee. “We are really working towards putting together a team and a support staff that make sure we put ourselves in the best position to try and get out of our pool and to the playoffs.

“If we were to play the World Cup today we couldn’t achieve that because we’re not there yet, but the work we can do over the next two years – I believes that with the talent of players we’ve got – we can achieve that.”

McKee’s wife was born in Ballina, Co Mayo, and the family came in hard looking for tickets. He got them okay but with one proviso. Their shirts had to have Suva.“I think they’ll turn up in green,” he says.

In June, Fiji was the only tier-two nation to play three tier-one internationals against Australia, Italy and Scotland. McKee led Fiji to two victories, homes tests against Italy (22-19) and Scotland (27-22).

It was the first ever time that Fiji had beaten more than one tier-one team in a single calendar year, while also beating Scotland for the first time since 1998. The Australian test saw Fiji lose to Australia in Melbourne 37-14.

“We come here with a strong belief in the sort of performance we can put in,” says McKee. “We’re disappointed from last week.

“It’s always difficult when you bring your players in from all different clubs. It’s very hard to gel in a short time frame. We know what a good side Ireland are. They have made changes, but we saw the team that played in Japan when the Lions were away. That team performed very well, so we know they have a lot of depth.”

Will they come to Aviva smiling? No, they will come to do damage. It can’t be handshakes all the time.

1 Dave Hannigan: Trump gets the clubs back out as death toll keeps rising
2 Safe return to play in New Zealand showcases the true value of sport
3 Dr Bob Rotella: ‘If you focus only on the target you’ll play darn good golf’
4 Zoom calls with Rory and the GUI bake-off: Neil Manchip keeping the flag flying
5 Sonia O’Sullivan: How to keep your competitive edge from going blunt
Real news has value SUBSCRIBE