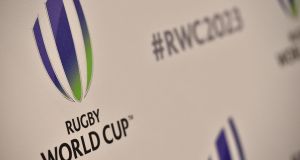 The host for the 2023 Rugby World Cup will be unveiled on Wednesday. Photograph: Getty Images

Ireland fail to top any category. They are considered a “significant risk” in stadiums that need upgrading and technology (the other bidders name a tech partner). The evaluation report questions Irish noises about breaking the American market and states “There is little focus on working in partnership with Rugby Europe or any of the other regional associations.”

Surprisingly, Ireland scores the same as the other bidders in security category.

The IRFU release a statement vowing to “compete to the final minute” and vaguely question the “scoring system employed.”

“Hopefully Ireland and France, like us, will stick to the moral high ground,” says Roux. “You can’t do any more presentations.”

Leo Varadkar, an Taoiseach, promises “full stadiums in the middle of rugby communities in our cities rather than in big soccer stadiums on the outskirts of cities that would be half empty.”

The French Federation President probably breaks the agreed code of conduct signed before the bidding process commenced when branding World Rugby “incompetent” and “amateur” while stated he was lied to about how the process would be conducted.

“What bothers me, primarily, is that the process was misguided, flawed,” Laporte told Le Figaro. “In the end, 80 percent of the report was made by World Rugby employees.

“There are obvious mistakes. How can World Rugby say that hotels in the most visited country in the world are worse than those in South Africa? They are taking the piss.”

November 4th: World Rugby releases a statement where it accepts “emotional” reactions are to be expected.

November 6th: The Irish bid claims to be on a financial par with South Africa in the redacted section of report.

Philip Browne, IRFU CEO, sends a letter to World Rugby CEO Brett Gosper. It is leaked to the media with an embargo and all. In it, the South African bid is picked apart while Browne describes their economic credit rating as “junk.”

November 11th: “I know Ireland would put on a fantastic World Cup,” says John Robbie, the former Ireland scrumhalf who has lived in South Africa for 36 years.

“But you have to have faith in the committee of experts that came up with the recommendation. South Africa really needs something to aim at. The bid was superb, it almost provided a lesson for the country as everyone, at all levels of society, came together.”

Ireland hand the Springboks a record 38-3 defeat in Dublin. France get walloped by the All Blacks in Paris.