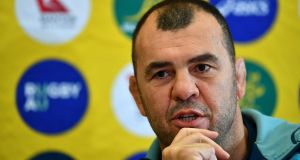 Michael Cheika has warned England that his maturing Australia side will be prepared for dirty tricks off the ball at Twickenham on Saturday. The head coach is backing his players to sort out problems for themselves, and will not be flagging up concerns to the New Zealand referee Ben O’Keeffe before the match.

Australia were the last team to defeat England at Twickenham, convincingly so during the 2015 World Cup, but they lost four times to the men in white last year, including a 3-0 whitewash in a home test series.

Cheika was then goaded into verbal sparring with his opposite number and one of his predecessors in charge of the Wallabies, Eddie Jones, but after announcing an unchanged side for Twickenham he volunteered that England would this time not get away with impeding players off the ball.

“England are a big, powerful side, and they will try to bully us around,” said Cheika. “They try to bully us at the scrum, the lineout and the ruck, and then they niggle, trying to get into our half-back after he passes and the 10 after he passes. There is so much footage of that: we like to take the ball to the line and they wait for us to crack.

Asked if what he maintained England did was legal, he replied: “If you get away with it, yes. I have not seen the referee, and I will not be highlighting it to him. I’m not complaining: it is part of the game, and you know it will happen when you take the ball to the line. You have to understand that, and get back up and get on with the next thing.”

The Australia No 8 Sean McMahon echoed his head coach when he said: “We have focused on the way England target our half-backs. We have to make sure we protect them at attacking breakdowns by clearing out and providing clean ball. We will be concentrating on that at the weekend.”

By making a point of highlighting the issue, there is no need for Australia to raise it with the referee. It was Jones who took the offensive in their jousts last year, but the England head coach was preparing what to say to the media when Cheika went on the offensive on Thursday, emboldened by improved results in recent months which include a victory over New Zealand.

Cheika announced an unchanged side after Saturday’s victory over Wales. It was the fourth in a row for a side which had previously lost at home to Scotland and conceded 54 points to New Zealand in Sydney, having last year lost all four matches against England and all three against the All Blacks.

“We have made a conscious effort to change the character profile of the players and develop a different approach to the game,” said Cheika. “We needed to make it a no-excuse culture: we are not happy to be ranked third in the world... It is about doing everything to be the best you can and owning everything, the good and the bad.

“We are learning to be more resilient because not having resilience is a big symptom of the excuse culture. We are a work in progress having had 25 debutants in the Wallaby jersey since the last World Cup.

“We needed to build our depth, and you have had to have some thick skin during that time, but you can see the camaraderie in the group. We may not have the [financial] resources of England, but there is a lot of love in the team; they fight hard for the small things.”

Cheika’s opposite number has straddled both sides in this fixture having coached the Wallabies in the 2000s. The Australian union was then financially secure, the 2001 Lions tour quickly followed by the World Cup, but this decade it has spent more on the elite game, not least because of the purchasing power of clubs in France, England and Japan at the expense of the grassroots and had to re-evaluate earlier this year.

“You have got heaps of cash over here,” said Cheika. “That is not being rude: it is true compared to what we have got. We are struggling to get a lot of things going when it comes to money back home, but when you have it you have still got to do something with it, which is what Eddie has done. He is using the resources wisely and making it happen.”

It is a meeting between the sides that lie second and third in the world rankings, behind New Zealand. The Wallabies were second after the last World Cup, but England’s 20 victories in 21 tests under Jones have taken them above the Wallabies and it is another year before they play the All Blacks.

“I do not think England’s position is false because they are beating everyone else,” said Cheika. “They are not number one because they have not played the other mob and that is the only way to catch them. If you beat the third-placed team flour times in a year you should be second.

“The ranking system is an important piece of the puzzle: we are lucky because we play New Zealand three times a year and the more we test ourselves against them and England, the better we are going to become.

“We are a team that is still growing spiritually and mentally, learning how to be tougher. You do not make any excuses when you are tough. I really enjoy being with this team, in victory and at half-time in Sydney when we were down to New Zealand by a big margin and they got themselves back together.

“When the rivalry is close as it is between England and Australia, the emotions go the full spectrum. The joy of winning is amplified, as is the pain of losing. That’s why the boys are so keen to play; they are counting down the days.”