France 2023: ‘This is not the World Cup of Bernard Laporte’

Whatever he might say, French rugby’s wily president is an absolute master politician 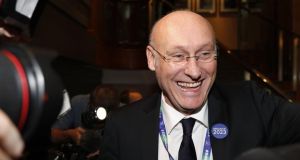 Earlier in the “transparent” process that ultimately gave France the 2023 World Cup, via two secret ballots, World Rugby fired a warning shot across the bows of all three nations: stop making promises, be it television rights or other quiet agreements, to voting associations.

The IRFU and SA Rugby were perplexed.

To the victor the spoils

To the victor go the spoils. Laporte, the French Rugby Federation president, who survived a media storm over dealings with Montpellier, owned by the billionaire Mohed Altrad, can now be framed as the saviour of Les Bleus.

“I had the beautiful role,” Laporte the politician said, having delivered a World Cup 10 years after Laporte the coach failed to capture the William Webb Ellis trophy on home soil.

“The economic benefits are enormous. More than one billion euro of direct benefits. So it’s a victory for France. There is nothing better than a World Cup to promote your sport. It will allow us to put French rugby on the right path.”

Laporte the rugby administrator is adamant that French rugby’s ability to unearth talent shall not be stymied by foreign arrivals.

“Reforms must be implemented,” Laporte told The Irish Times in August. “Fewer foreign players in French clubs. By July 2020 only between five and seven foreigners will be allowed in French match-day squads.”

So is it five or seven?

“It is a negotiation,” the dome-headed diplomat said with a smile, easily switching to a language he claims to barely understand. “The clubs say seven, I say five.”

This jagged pill World Rugby must swallow, having come out so blatantly in favour of South Africa, prompted Laporte to breach the code of conduct, signed before the process, when branding the governing body as incompetent, lying amateurs.

Hindsight tells us the outburst was a strategic master stroke. The 53-year-old’s Le Figaro interview on November 3rd showed his ability to manipulate the media long before that penny dropped on Lansdowne Road.

Those slicing words – “Mensonge, incompétence, amateurisme” – allayed any fears French supporters on the World Rugby Council may have held after the report dropped, on October 31st.

What of World Rugby’s concerns about Paris 2024?

“On the contrary, it is an added value,” Laporte shrugged when it was put to him that rugby’s flagship event would suffer in the shadow of the summer Olympics despite World Rugby’s desperately seeking to avoid a repeat of problems – such as not building the final stadium – it has encountered with Japan 2019 stooped under the weight of Tokyo 2020.

“We have the best candidacy. The only issues that come back are security. The fact that the IOC is going to give the Olympic Games to Paris does show, clearly, when it comes to security that assurances have been given and therefore it is good to have the 2024 Games. And then, for selfish reasons, it is always better to be there before the Olympic Games rather than after.”

“There is nothing to say to World Rugby,” Laporte continued. “It is not World Rugby that will be voting.”

Even if they back Ireland or, however unlikely it seemed at the time, South Africa? “The aim is to have the best bid, and then you have to convince [voters]. When it comes to the World Cup you have to take into account economic factors – 94 per cent of WR’s income comes from the Rugby World Cup.”

Turns out the French were more sinned against than Ireland by World Rugby’s now defunct evaluation report. Their “lack of clarity around pitch measurements” despite “exceptional” stadiums was severely punished, and an anti-doping policy so progressive that it is against the law lost them marks.

The French were picked apart because of laissez-faire attitudes to transport, rugby medical expertise, concussion issues and – the final straw as far as Laporte saw it – concerns about their infrastructure.

“There are obvious mistakes,” Laporte said. “How can World Rugby say that hotels in the most visited country in the world are worse than those in South Africa? How can it be said that there are not enough hotels in Saint-Étienne, which, for the record, hosted European Championship football matches 18 months ago? They take the piss out of us.”

Laporte is the only one laughing now.