Liam Toland: Unique Fiji style both a danger and opportunity 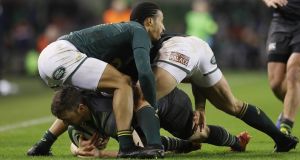 The greatest enemy of a good plan is the dream of a perfect one. Where future World Cups end up after this bizarre week only time will tell, but where Ireland end up after the Springboks is certainly worth examining.

Firstly to Darren Sweetnam and his first touch in international rugby. Many have dreamed of an Irish cap but most would want an easier first touch than picking a ball up on the run off the skiddy ground. What phenomenal skill and mental fortitude.

However, my point has nothing to do with Sweetnam but to do with the Springboks. How centre Jesse Kriel and winger Courtnall Skosan did not rip Sweetnam limb from limb, lying there as he was all alone for five full seconds, I’ll never know. Why they didn’t simply drag him into touch or even drag one foot into touch. But that Skosan didn’t smash Sweetnam into touch when he was at his most vulnerable is completely unacceptable.

Fair play to Ireland’s sub hooker Rob Herring for bursting a gut to get to Sweetnam while time ticked. Suspending time is one thing but that the Springboks suspended it is outrageous; a finable offence. Add to that their abject skill set, incapable of four-man lateral passing. Skills are upper most but at times, especially in the Six Nations, we focus in on one set of skills whilst others erode. Ireland skills will rarely (never) gain the time afforded to them by the hapless Springboks.

Fiji bring with them a culture and style that is unique in our game. That it becomes loose is both a danger and an opportunity. Team selection has changed this week and for many gaining their first cap, or indeed a precious second cap such as the big man Stuart McCloskey, there is a conundrum worthy of examination.

Fiji may suck those Irish players who have meek opportunities to stake a claim into a non-Joe Schmidt style of game. Off-the-cuff rugby with huge risk versus reward and resulting errors does not equal reselection. I wonder what Schmidt would have said to Kriel and Skosan if they were his players? They’d never play for him again, I fancy.

So what do the “new” Irish players have to do tomorrow in order to gain favour and reselection? A skill which is of crucial importance to any Schmidt side is the breakdown. Point of contact I’ll discuss later, but last Monday I mentioned the extraordinary selflessness of the Irish clear outs by Toner, Tadgh Furlong and especially Rob Kearney who is definitely defying the traditional “fancy” role of the fullback.

As the clock ticked towards half-time Ireland launched a flow with Sean O’Brien carrying in midfield (encouragingly miles from his traditional place) and Siya Kolisi scrag tackled him to deck; start the clock on 40:30 and enter Kearney where he crocodile rolled number eight Francois Louw on 40:33 when O’Brien was at his most vulnerable.

Kearney has many competitors for his jersey one of whom is unfortunately banished to France. Others may have more to offer in the transitioning counter attack role but in breakdowns Kearney is pure quality. I’m sure tomorrow Andrew Conway is expected to follow this example.

But two breakdowns, four minutes apart, really caught my eye. At the start of the second half 40:24 to be precise scrumhalf Ross Cronje box kicked out of his 22. Kearney fielded and ran back as he did many times last Saturday. I’m not sure if no one offered to carry off him or he was under orders not to pass but he found traffic and contact each time. However, this time three Springboks got to him where Louw once more jackled; over the fallen Kearney. As O’Brien arrived Louw crucially got his shoulders below O’Brien’s and with no way to be shifted, penalty South Africa.

To be fair, O’Brien was retreating and not ideally placed. This brings a sidebar of Kearney’s approach to heavy traffic; would moving the point of contact add zip and value to the ball and subsequent transition?

Either way the lesson was learned by O’Brien for the exact same was to occur four minutes later when on 44:29 Cronje once again boxed kicked and once again Kearney fielded (a bobbling ball) but this time was swamped by onrushing Springboks where once again Louw was prowling! But this time O’Brien was on to Louw; in that he was on to his intention and got his shoulders below the Springbok number eight. This was quality reading by O’Brien and even better breakdown technique by getting his feet positioned and shoulders below Louw’s to earn an Irish penalty. Jordi Murphy to mimic.

Many times I’ve discussed the point of contact where it was lovely to see that Sean O’Brien’s first real carry actually wasn’t a carry at all! On 7:18 Conor Murray spun infield to O’Brien who had Devin Toner on his inside and CJ Stander outside him. Toner was a simple decoy but Stander had a role, especially as three Springboks sensed a big carry from O’Brien. That secondrow Lood de Jager was the outside defender and had turned his shoulders inwards to O’Brien gave Stander a huge opportunity. Clearly O’Brien spotted this and as Jager bit on O’Brien (the wrong man) he gave a lovely tip-on to Stander.

This simple combo is worth gold to future games where tomorrow Jordi Murphy, Jack Conan, Rhys Ruddock and especially Ultan Dillane can easily mimic in opening up opportunities.

There’ll be terrible internal pressure on each Irish player to ‘perform’ tomorrow where Fiji’s style may distract from same so it’ll be crucial to temper tactics to suit reselection.

1 ‘A radical departure’: Who are CVC and what are their plans for rugby?
2 Ken Early: Why international football is fading into obscurity
3 Colin Kaepernick’s exile is too fresh for NFL to speak out on US protests
4 Connell losing touch with club championship is real tragedy of Normal People
5 Michael Jordan speaks out against George Floyd killing in rare statement
Real news has value SUBSCRIBE