Joanne O'Riordan: I’m angry at how IRFU have ignored women

With all eyes on 2023, the men in blazers were just paying lip service to the women’s game 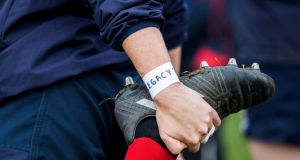 A player wears a “legacy” wristband to protest the abominable treatment of women’s rugby by the IRFU. Photograph: Oisin Keniry/Inpho

I still remember driving to a local match after hearing what the IRFU did to appoint the new Women’s XV coach and thinking to myself, as a joke, to give it a go. I’ll hold my hands up and say rugby is not my forte, but the way the position was advertised, it looked like specialisation in rugby wasn’t exactly a necessity.

Then, my laughter turned to anger. I could roll out all the cliches, such as “how dare they”, but the thing is the IRFU know. We know you know. The Women’s World Cup was not a massive success from the Irish perspective, and it was clear the manager lost the dressing-room months before the tournament. The interview with Ruth O’Reilly showed that.

Fast-forward to this month, and you had RTÉ’s head of sport Ryle Nugent come out and say that the IRFU rejected two prime time TV slots for the women’s team. The first slot, Friday, was unsuitable for the amateur players, an understandable reason, but the rejection of the Saturday slot baffled me. Countless women, journalists, players, analysts and others have gone through step by step on how to grow the game, and it has all been ignored or cast aside by the IRFU.

Ireland moved to Donnybrook in 2016. Twelve of the 15 women’s Six Nations games, from 2010 to 2015, were on Friday nights. While attendances were mediocre, nothing has been done to change it. You’d almost want to be telepathic to find out when games are on and chances are it’s at an odd time where it’s not suitable to bring kids.

That’s not fair to anyone, not to the women who train incredibly hard and risk their bodies, nor to the poor volunteer stewards standing at the gate in the freezing cold.

To an outsider, you could say the Women’s World Cup was a start. It did portray everything we could do . . . but there was so much further to go. Throw out all the cliches such as “we’re great craic”, “best fans in the world” and “look how well we hold tournaments”.

Since the Women’s World Cup has come and gone, all eyes have turned to 2023. The women’s game has been ignored. The manager’s status has been demoted to part-time on a six-month basis, and a prime TV slot was rejected. All the talk we heard about growing the game at grassroots and so on – it seems to me it was lip service. Am I shocked? No. But, I am disappointed.

I stood and listened to all the statistics from Australia on growing the women’s game, and I heard the IRFU representatives complimenting those figures and stating they were committed to doing the same. We all clapped and nodded as we all felt this time would be different. We could be world leaders and groundbreakers. Hey, we could even host a major international tournament.

The bitter irony is that, sadly, the IRFU don’t care about you. They are not in this for your happiness

Sure, I fell for it. I’d love if Ireland hosted a major tournament, but, sorry to say, we’re not ready for it. The infrastructure connecting counties is not there. I was at a global economic forum in Ireland for 2016, and the same points were raised continuously: rural Ireland is dying, all roads lead to Dublin, maybe you should link Cork to Donegal in the future. A year on, we decide to go ahead and bid for a tournament we don’t have the infrastructure to host.

After World Rugby’s technical review group decided South Africa was the most suitable nation to host the 2023 Rugby World Cup, a part of me chuckled. Not in that begrudging way where I choose to laugh at my country’s bid – I’m happy we put our necks out – but that the same issues that were spoken about in 2016 were reiterated in the report. I read the report and, in fairness, the points they made were the same points I heard at the economic forum.

Never ones to give up, Ireland went on the defence. Poorly. And it was at that moment in time I thought of all the cuts the IRFU made to the women’s game. I thought of Ruth O’Reilly criticising the men in blazers, and I thought she was dead right.

They did not think. If the IRFU cared, the infrastructure would have been thought of and not ignored like the women’s team. The women’s team would not have been made a laughing stock for going through the humiliating demotion that occurred.

The bitter irony is that, sadly, the IRFU don’t care about you. They are not in this for your happiness. They’re in this for their own satisfaction, their own prestige. The greatest fans in the world have now lost out on the potentially greatest rugby tournament in the world.