Opportunity knocks on a grand scale for Ireland's newcomers 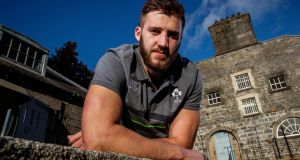 Stuart McCloskey is recalled to the Ireland starting lineup 20 months after his debut against England. Photograph: Ryan Byrne/Inpho.

Opportunity knocks on a grand scale, because opportunities like this are rare enough. Rarely has such an untried Irish team been pitched into the Test arena and, hence, within the context of the collective, and in the need to play cohesively, this is a hugely important game individually for all involved.

With 13 changes, and a positional switch which sees Andrew Conway shift to fullback and only Devin Toner continuing where he started a week ago, new combinations abound in a mixture of relatively untried or relatively forgotten players. Toner accounts for over a third of the starting XV’s 148 caps.

By contrast, when Joe Schmidt and co announced a completely changed team for the comparable game against Canada a year ago one week on from Chicago, the starting team still boasted 284 caps, with some experienced operators such as Cian Healy, Sean Cronin, Peter O’Mahony, Sean O’Brien and Keith Earls.

To a degree, many of this team are being thrown in at the deep end for a fixture in which they are 27-point favourites against a relatively strong Tier 2 team in Fiji, who are currently ranked ninth in the world and coming a week after the front-liners set an exacting benchmark.

The imposing, 110kg, 24-year-old Chris Farrell makes his Test debut after completing a circuitous route from Ulster to Grenoble to Munster. Although he is the only debutant, all told, 12 of this 24, including eight of the starting line-up, have five caps or less, and for all but a few of them opportunities like this probably won’t come along again any time soon.

Even the second most capped player, Jack McGrath, has a point to prove. Scmidt’s hand has been forced a little by John Ryan’s strained calf, but it’s a measure of his belief in the talent and physical abilities of the 120kg Andrew Porter, a converted loosehead, that he starts a Test at tighthead having started just one game there for Leinster. Indeed, of his 15 Leinster games, all but two have been off the bench.

For Ultan Dillane, it’s only his second Test start, and his first Test since the Italian game last February. Even for the 17-times capped Jordi Murphy, this is an unexpected and gilt-edged opportunity after falling down the pecking order in Leinster’s uber competitive backrow area, in what is his first cap in over a year since scoring a try in Chicago, when he also suffered the ACL injury which ended his season.

It will be particularly intriguing to see how a relatively callow backline goes, in what will constitute full home debuts for Joey Carbery (after five minutes at outhalf this season), Stuart McCloskey and Darren Sweetman.

“I think we are asking a lot of him,” admitted Schmidt of Carbery. “The comforting thing is he is he takes a lot on himself and he wants to be as good as he can be. If you put yourself under pressure you find out a little bit more about yourself and you learn about yourself.”

“We don’t necessarily have many windows for Joey to accelerate his learning so this is an opportunity for us to try and accelerate that as best we can. He has played almost 450 minutes of competitive rugby this year but that has all been at fullback. For him the time, the space of this match, it tightens the whole thing up and for him to move from 15 to 10 it tightens the whole thing up a lot further. It is going to be a tough day at the office for Joey and we want to see how he negotiates that really.”

McCloskey finally bridges a 20-month gap since his debut against England at Twickenham and at 109kg, alongside Farrell (219kg combined) they must form the biggest Irish midfield combination of all time. Compare and contrast with the D’Arcy-O’Driscoll axis, circa 184kg combined. How did they survive so long?

After an injury bedevilled couple of seasons, for Dave Kearney it’s his first Test since Ireland lost in Paris 21 months ago. Even Conway will be starting his first Test at fullback on home soil. Out of contract at the end of the season, his stock and his versatility continue to rise in tandem with Simon Zebo’s impending departure to Racing.

The Fijians arrive with a decent scrum as well as their traditional free-spirited, free-running, offloading game, and so there is the security of a reasonably well stocked bench, especially up front, in the shape of Cian Healy, Tadhg Furlong and CJ Stander.

“Any result would be really good because Fiji are ranked a lot higher than Canada,” said Schmidt. “They bring a different level of physical impact and athleticism and skill, particularly through the back end of the tackle with their ability to offload and keep the ball alive and really damage you. This is probably a tougher challenge because of how they play and where they’re ranked and the individuals they have.

“We’re a bit more vulnerable this time,” the Irish coach admitted, as against Canada a year ago. “I’d love to see them get a result. As much as anything, we’re looking at individuals, at how they perform and how they fit in, because we just don’t have these opportunities, apart from this. Next week is Argentina and then first up is France away. It is not a place to experiment.”