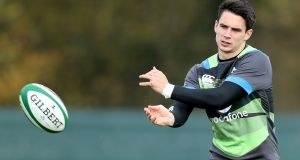 Joe Schmidt on soccer. For the week that was, the Ireland coach voiced his sympathy for football counterpart Martin O’Neill and called on the IRFU to learn from the failure to land the 2023 World Cup by bidding for the 2027 tournament.

“Two things that looked so promising – I really feel for Martin O’Neill,” said Schmidt. “To get the early goal and there was almost another brilliant goal. Once you are chasing a game it becomes so hard. I have been in exactly that same position and not got the result. I certainly sympathise with that.”

Argentina come to Dublin next week.

“The World Cup, it’s pretty gutting not to have won that over but all you can do, really, it those situations is dust yourself off and have another go.”

Schmidt makes 13 changes in what is increasingly becoming a developmental November series for Ireland. This is not by choice. The Springboks failed to provide a searching test last Saturday evening at the Aviva stadium and Fiji are not expected to trouble what is a third string starting XV in several positions.

“There is no better way to test people than to throw them into the arena,” said Schmidt.

Andrew Conway gets a chance at fullback as Rob Kearney makes way despite only featuring in three games this season. No sign of Jacob Stockdale despite a magnificent home debut in the 38-3 victory over South Africa.

Dave Kearney returns on the left wing, after a string of injuries this past two seasons, for his 17th cap.

Joey Carbery starts at outhalf despite the majority of his exposure in Leinster blue being at fullback.

“I’m just loving every opportunity I’m getting at the moment,” said Carbery. “Love getting my hands on the ball, been training a lot at 10 and feel pretty comfortable with players like Stu and Kieran around me makes my job a lot easier.

“I’ve been practicing a lot with Richie Murphy who has been putting me under pressure because when you go out and kick in front of 50,000 it is a lot different than kicking after training with nobody watching.

“It’s the mindset I’ve been working on.”

Chris Farrell’s return to Ireland, with Munster, after three seasons in Grenoble is rewarded with a first cap as Schmidt fields the biggest ever Ireland midfield.

Farrell, all 6 foot 4 inches and 110kgs of him, is joined by fellow Northern Ireland man Stuart McCloskey, who weighs in at 109kg and is an inch shorter, for his second cap.

“Four years ago we would be going out with Darce and Drico,” said Schmidt. “How those guys punched above their weight was phenomenal. Maybe the shoe is on the other foot now but it’s pretty hard to intimidate a Fijian team.”

Robbie Henshaw is on the bench.

Rhys Ruddock captains the side, picking up where he left off on the unbeaten tour of the US and Japan last June.

An interesting selection is Andrew Porter’s first start at tighthead prop. Unable to dislodge Michael Bent as Tadhg Furlong’s understudy at Leinster, Porter was one of the best loosehead props at the Junior World Cup in 2016 when Ireland reached the final.

The switch across the scrum is a logical attempt to ensure a cleaner spread of propping resources. Porter’s education at tighthead is being accelerated with an eye to the 2019 world cup in Japan.

“It’s the acid test for Andrew, undoubtedly. He has thoroughly impressed us. He is a long term project for the here and now, suddenly. He needs to get comfortable in an uncomfortable environment.”

Kieran Marmion is the most capped back, with 17, while Devin Toner’s 51 appearances in a green jersey is only equalled in experience by Jack McGrath’s return to the match day squad.

Fiji have made four changes from the defeat to Conor O’Shea’s Italy in Sicily last week, with Montpellier’s 6’ 5” and 135kg winger Nemani Nadolo coming in on the right flank.

Cricket Australia boss casts doubt over ‘high risk’ T20 World Cup 08:41
Boston Marathon cancelled for the first time in 124-year history 08:00
Premier League to restart on June 17th, Andy Farrell on lifting the Monday blues 07:43
Anfield and Cheltenham show sports again lacking in looking after their own 07:00
Louise Galvin’s rugby career on hold for work on the frontline 06:30
Here is your handy guide to sport on television this week