Jack Conan still pushing despite cards being stacked against him

Leinster man says that there is no rivalry in the squad, only competition for places 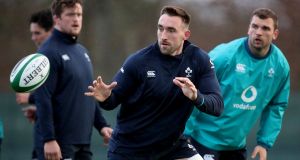 Ireland’s Jack Conan during training ahead of the Guinness Series clash with the USA. Photo: Dan Sheridan/Inpho

Jack Conan is far from self pity. But you can feel his pain. He’s been doing what he can, doing a fine job. But sometimes the rugby life deals you a hand.

Conan knows it is time to start playing the hand he has been given and in the evolving landscape has looked to Simon Easterby for sessions at blindside flanker as well as number 8.

“There is no rivalry here,” says Conan of the team dynamic. “It is competition. One hundred per cent.”

Time was pre-Joe Schmidt that if you brought as much to the backrow as Conan does at number 8 you got on the Irish team, held the Irish shirt.

Not anymore. He knows that and this week won’t hesitate. After the choppy waters and hurricane blow out of the All Blacks, this could feel like a doldrums week. But Schmidt has already addressed that.

“Yeah, he started off the week by saying that this isn’t just a chance to relax,” says Conan. Who was he telling?

It has been a bloc of of frustration for the Leinster backrow. He has said it to Irish forwards coach Easterby, asked what more can he do. Already roundly acknowledged by the coaching staff as part of a key shadow Irish team that drove players last week, Conan accepts the vicarious praise.

But the competitor inside won’t let it sit there. Players have spoken about the concept of bibs driving standards. He has worn the bib in training, played the opposite number in the run through, bit his lip and maybe also was New Zealand captain Kieran Read.

“Ha, I actually wasn’t no. Sadly,” he says. “I wanted to be, but since so much of their lineout went through him and I probably wouldn’t be the greatest lineout option in the world it was one of the second-rows.

“I think it might have been Tadhg Beirne or Quinn Roux who was in the lineout because he takes 80 per cent of their ball. I was Liam Squire last week.”

Less a slow roll towards the end of the campaign, this week has been one for venting grievances and irritations, resolving slights and annoyances. The US may not meet the railroading Irish team of last week but one with as much to prove.

The training ground might have a fraternal vibe, a collegiate centre but there is never more enmity than brother against brother. Blood spilled there stays there. It can be a testy place to be.

“Absolutely, even there today there was a really good bite,” says Conan. “Obviously no one is going out to take the head off each other because that would take away from the team, the lads would pick up knocks.

‘I made that hit’

“That bite is there, it’s tough. It’s the Tuesday after a massive Test game so there wasn’t massive amount of contact in it. But our mindset is... we’re in the right spot, were not just letting lads run past us and throwing out an arm and saying ‘I made that hit’. We haven’t been messing around all week.”

Envy is fuel. Envy is edge. Envy is motivation. Envy is wanting more. Envy is when the USA take a headline from a local newspaper and use it as a example of Irish arrogance and pretensions, Conan’s envy of watching last week’s fantasy game will be waiting.

Any idea of treading water or notion that America represent a soft landing into a European rugby spangled Christmas is to believe Schmidt is not a small ‘M’ Machiavelli but Santa Claus.

“Probably one of the best days in Irish rugby. Ever,” he says of the New Zealand deposition. “Envious of the lads who got to do it. I think it’s fuel for the rest of the year as well.

“If I get a shot this weekend it’s a good opportunity to show that I was frustrated to not have played as much as I would have liked. It is frustrating but I’m in the most competitive position in the entire squad. In my eyes.”

Last week Conan was saying to Easterby that it was hard to jump the queue, get ahead of people without getting the opportunity to play a bit. Easterby was listening. Conan is thankful, understands opportunity doesn’t come without judgement.

“These lads are chomping at the bit, they are fired out,” he says. “We know how tough this game is going to be.”

Sounding like he loves the embrace and impact of every word.