Gerry Thornley and Liam Toland reflect on a historic night at the Aviva Stadium as Ireland claim a first ever home win over New Zealand, winning 16-9. Video: David Dunne 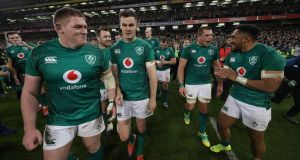 Not the least extraordinary aspect of the revolution under Joe Schmidt’s watch is not so much how the rest of the world views Irish rugby, but more how we view ourselves. Layer by layer, he is helping to remove a lot of scar tissue.

Of course, it is not all down to one man.

As Warren Gatland readily admits, the first ingredient to being a good coach is good players. And like never before, the Irish system is producing a relative conveyor belt of great players.

Throw in exceptional assistant coaches, and even Ireland have a chance. Had Schmidt taken over the reins two decades ago, straight from his days with Mullingar, even he might have struggled.

Of the last four meetings, three have been in Dublin and one in Chicago, and the crowd were a huge factor last Saturday

Around then, the IRFU had to be dragged kicking and screaming into professionalism, but people like Tom Kiernan and Syd Millar had a vision of four professional provinces with home based players competing in the European Cup.

Ever since, and increasingly so, Irish rugby is punching way above its weight, especially against the comparative financial behemoths of English and French rugby, thanks in the main to central contracts, a healthy limit on imported players, a thriving schools game (if largely located in fee-paying Leinster schools), investment in the academies, as well as, and herein lies a key, recruitment of the best coaches.

A little perspective is called for. The All Blacks remain the world’s number one ranked side, and 11/10 favourites to win a third World Cup in a row. Ireland have just beaten them at home for the first time in 114 years and 17 attempts. They haven’t been to New Zealand since 2012, much less won there.

Of the last four meetings, three have been in Dublin and one in Chicago, and the crowd were a huge factor last Saturday. But Ireland have cemented their status as the world’s second best side and second favourites for the World Cup.

This is new territory.

On the Second Captain’s podcast on Monday, Simon Hick suggested Ireland has the best pack in the world. Yikes. There’s too much scar tissue to shout that from the rooftops. But then again there’s none, or few, better in their positions than Cian Healy, Tadhg Furlong, James Ryan and Peter O’Mahony, and when you think of them collectively at scrum, lineout and maul, not to mention their overall work-rate and breakdown efficiency, who’s better?

Mentally this squad are in a place never previously occupied by an Irish rugby team globally, or perhaps any Irish sports team.

Not alone was last Saturday’s win the first on home soil, but it was the second in three meetings. That win in Chicago always had an asterisk beside it. Neutral venue. The All Blacks were distracted by commercial demands. Brodie Retallick and Sam Whitelock weren’t playing.

In the four clashes under Schmidt, a Kiwi after all, Ireland have a plus four lead on points aggregate. This is history rewritten large. In three successive beatings in the 1980s, the aggregate was exactly 80 points to New Zealand.

The previous Golden Generation broke down plenty of barriers, but Brian O’Driscoll was no wins from 14 clashes against the All Blacks, Donncha O’Callaghan none from 12 and Paul O’Connell none from nine, to take three examples.

In half a dozen meetings, including the Lions, Tadhg Furlong is three wins, one draw and two losses. CJ Stander is 2-1-1. Josh van der Flier is 2-0-1. James Ryan is one win from one. Ditto the replacements Porter, Luke McGrath and Larmour. Joey Carbery is two from two.

The new breed might be inclined to wonder what’s all the fuss about?

Of course respect for the All Blacks remains. Absolutely. But the mystique and the fear factor have been removed.

Ireland have long since become the new Munster (last Saturday finally emulated the celebrated Thomond Park heroes of 1978) and similarly this team is increasingly adored because of its unrelenting honesty of effort.

As Furlong said four days out from the game, the starting point for Ireland was work-rate, and throughout this squad under Schmidt there’s no doubting this characteristic. His own barnstorming combination of potent scrummaging, which had a major contribution to the scoreline, typified this.

Bona fide world number two and second favourites for the World Cup this Ireland squad may be, but the way they have backed up a Grand Slam with a series win in Australia and now a second win over the All Blacks suggests they can cope with the expectations.

Come the kick-off in Japan, reality will dawn. Along with Gregor Townsend’s dangerous Scots and the ever-improving hosts, Ireland have a tough draw. Should Ireland make the quarter-finals, there will be no avoiding the All Blacks or the ever-improving Springboks under Rassie Erasmus, who are third favourites.

And as we all know, the World Cup quarter-finals represents Irish rugby’s last remaining glass ceiling.

Just the one piece of scar tissue left.

1 Gordon D'Arcy: Ireland must conquer fear on a scary Halloween in Paris
2 Dave Heffernan delighted to have banished bad memory of his first cap
3 Cork City expected to approve €1 takeover by Preston owner
4 Cian Healy: ‘Realistically I got away with murder when I was younger’
5 Robbie Henshaw likely to be the only Irish change for France finale
Real news has value SUBSCRIBE

LA Dodgers land World Series to end 32-year drought 08:38
MCG could welcome 25,000 fans for Boxing Day Test 08:21
Gordon D’Arcy on a Halloween thriller; Will an empty Hill derail the Dubs? 07:51
Gordon D'Arcy: Ireland must conquer fear on a scary Halloween in Paris 07:55
Seán Moran: Will a silent, empty Hill help to loosen Dublin’s grip on Sam? 07:55
Crossword Get access to over 6,000 interactive crosswords