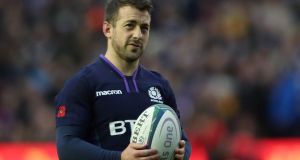 Scotland captain Greig Laidlaw says his side are braced for a tough test against South Africa at Murrayfield on Saturday. Scotland have won just five of their previous 26 meetings with the Springboks, the last of which was eight years ago when Gregor Townsend was assistant coach for a 21-17 triumph.

South Africa, who have outscored Scotland by 15 tries to one in the last three meetings, lost to England and beat France in two close-fought matches on tour so far.

Laidlaw, though, says their recent victory over New Zealand is a true indication of the size of Scotland’s task. “It’s going to be a hard Test match, that’s for sure. They’re a very good side, and they’re coming off the back of victory against New Zealand in the Rugby Championship.

“They’re playing with a lot of confidence, coming back to win well last week against France. It’s going to be tough but we’re looking forward to it. We had a good win here last weekend against a strong Fijian team. It comes back to us, we’ve prepared pretty well all week.”

Scotland head coach Townsend has made six changes to the team that started last week’s game against Fiji.

Centre Huw Jones, whose professional career began in South Africa, is the only new name in the backline, but Townsend has brought Gordon Reid, Stuart McInally, Jonny Gray, Ben Toolis and Hamish Watson into a beefed-up pack for what he has described as “the biggest physical challenge in world rugby”.