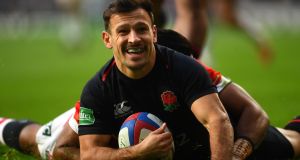 England’s Danny Care touches down for the first try against Japan at Twickenham. He has been dropped for the Australia Test. Photograph: Mike Hewitt/Getty Images

Scrumhalf Danny Care has paid the price for England’s poor first-half against Japan, dropped from a 28-man squad named by coach Eddie Jones for the final November Test against Australia.

Ben Youngs is the probable starting scrumhalf, with Richard Wigglesworth providing back-up. Care, who scored England’s opening try in his first start since March, was replaced by Wigglesworth an hour into Saturday’s contest.

Northampton’s outhalf-centre Pier Francis has been included in the squad announced on Monday, but there was no place for centre Alex Lozowski, who had made way for Owen Farrell at half-time after a torrid 40 minutes against Japan.

Loose forward Zach Mercer is another to be culled and is replaced in the squad by number eight Nathan Hughes, available after serving a six-week suspension.

Manu Tuilagi is again included but, with Jones saying over the weekend that he still has work to do to get back to full fitness after a groin injury, he could well miss out again when the team is named on Thursday.

Jones will be looking for an immediate improvement from Saturday, when a team featuring 11 changes from that beaten narrowly by New Zealand found themselves 15-10 down at half-time before battling back to win 35-15. “The schedule itself was good, the cohesion was less than we’d like,” Jones told Sky Sports News on Monday in relation to the short turnaround he put in place to replicate next year’s World Cup programme.

“It was always going to be difficult and we’ve some ideas on that.” In the continuing absence of Billy Vunipola, Jones could be tempted to throw Hughes straight in against Australia, despite his lack of game time.

“He did a session on Friday and another yesterday and is not in bad nick,” Jones said. “We’ll see how he is this week – he’s in contention.”

Winger Chris Ashton is being monitored after a calf strain forced him off early against Japan.

One man certain to start is Farrell, who made an immediate impact when he came on against Japan.

“He’s really grown as a leader, really stepped forward; and with Dylan [Hartley] it’s a really strong pair,” Jones said of his co-captains, neither of whom started against Japan. “The official title has probably encouraged him to be more active in that area and that has helped the team.”

England will be chasing a sixth successive victory over the Wallabies, who ended their own poor run with a solid but unspectacular 26-7 win in Italy.

“He’s my old mate, he’s always at his best when they’re under pressure,” Jones said of Australia coach Michael Cheika.

“He loves that, he’s a street fighter, so it does make them dangerous, But at the same time we’ve had a tough year, too, and we don’t mind a scrap either, so it should be a good scrap.”

Ulster start fast to put the Dragons to the sword in Belfast 17:38
Here is your handy guide to sport on television this week 17:01
Southampton stop Everton in their tracks at St Mary’s 17:11
Inspirational Burke points the way as Dublin clear opening hurdle 16:35
A changing of the seasons as Minella Indo lines up at Wexford 15:40
Crossword Get access to over 6,000 interactive crosswords