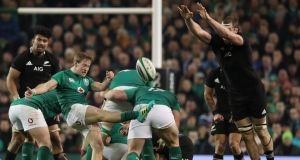 Jordan Larmour and Kieran Marmion will take no part in Ireland’s final match of the November series against the USA on Saturday with the Irish scrumhalf also certain to be unavailable for Connacht for the foreseeable future.

Marmion rolled his ankle against Argentina and although he was able to play in last Saturday’s historic win over the All Blacks, it was decided now was the right time to sort it out.

“Kieran has been carrying an injury for the last couple of weeks. He’s been fine and has been obviously able to get through the games no problem,” said Irish skills and kicking coach Richie Murphy.

“I think it goes back to the Ulster game and from that on he re-hurt it against Argentina. It’s not great for Connacht because he is going to miss out for a couple of weeks. But it was thought that it was the right time to fix it up and be ready for what’s coming up in the New Year.

“He was fine during the games. He rolled it against Argentina and came off soon after that. It’s just an ankle injury that needs to be cleaned up a little bit.”

Larmour has returned to Leinster having been involved in the first three games of the series. It was confirmed that he is not carrying an injury.

“We’ve just released him back,” said Murphy. “He’s a little bit beaten up like a lot of guys over the last couple of weeks. But there is no injury there. He should be fine.

“Everyone that’s in here (Carton House) is ready to train and play at the weekend. Obviously there will be some changes in the team because some guys have been released back. It’s a great opportunity for us to see they guys who helped prepare the team over the last couple of weeks.”

Murphy added that Joey Carbery is likely to get an extended run against the Eagles. The backup outhalf to Johnny Sexton has had greater exposure to the position having moved to Munster. Ireland continue to see him as growing into the role.

“He’s always seen himself as a 10 so having the opportunity to pay there week in week out is what he needs in order to develop as a young 10,” said Murphy.

“If you look through how he had to solve the problems in Exeter and those European games. There’s a nice air of confidence about him and he’s applied himself really well. A reasonably good performance against Italy and two small cameos coming off the bench so it will be an opportunity to see a bit more of him this weekend.”

The match takes place to the backdrop of outhalf Sexton being nominated for the World Players of the Year award, which will be presented at the World Rugby Awards at the Salle des Etoiles in Monte Carlo on 25th November.

“Yeah I think it’ s very fitting (Sexton selection),” said Murphy. “I know him since he was in the Leinster Academy. He has always been a driven player and massively talented and an unbelievable head for the game.

“I think that’s where he stands out for me above a lot of the other players out there, his ability to see things on the pitch and pick the right options.