New Zealand name their team to face Ireland at the Aviva

Ryan Crotty is named in the centre, Anton Lienert-Brown comes onto the bench 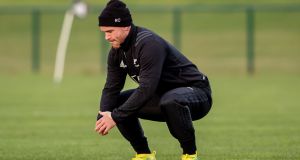 Ryan Crotty will replace the injured Sonny Bill Williams in New Zealand’s squad for their autumn Test against Ireland on Saturday.

The rest of the All Blacks team remains unchanged from the side that beat England 16-15 last weekend.

Williams suffered a shoulder injury during the match at Twickenham and was ruled out of the clash in Dublin, which will see the world numbers one and two go head-to-head.

Anton Lienert-Brown will come into the run on reserves in the 23 jersey.

All Blacks head coach Steve Hansen said the match would be “another great challenge” for the squad, adding that making the most of any opportunities would be the key to claiming victory.

He added: “These are the types of Test matches that get everyone up — it’s number one versus number two — and there’s a real excitement that’s building as we get closer to Saturday.

“We’ll be playing an opponent who will want to keep the ball for long periods of time, and if they aren’t getting what they want, then they’ll kick and try to pressure us.

“For us, we’ll need to be strong at set piece, both on our ball and theirs, and be prepared to work hard with or without the ball.

“When the momentum comes our way, we’ll need to take the opportunities that will come, as the team that makes the most of their opportunities will win the game.”

The match will be significant for three New Zealand players; Aaron Smith will play his 82nd Test match and become the most capped All Blacks halfback in history, while Brodie Retallick and Samuel Whitelock will set a new record for an All Blacks starting lock partnership, starting in their 50th Test together.

New Zealand will retain the world number-one ranking even if number two side Ireland win in Dublin this weekend.

The All Blacks’ top-dog status would have been under threat had they lost to England last weekend, but their victory means the back-to-back world champions will stay world number one come the turn of the year.