Rugby Australia has terminated fullback Israel Folau's contract for committing a high level breach of the players' code of conduct by sharing a social media post in which he said hell awaited "drunks, homosexuals, adulterers" and others. 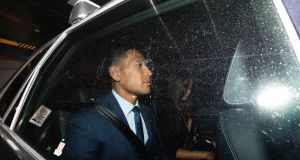 Israel Folau has had his contract terminated by Rugby Australia after he made homophobic comments on social media. Photo: Paul Braven/EPA

The three-member panel, comprising John West QC, Kate Eastman SC and John Boultbee AM, announced on Friday that it had decided to terminate the Wallabies star’s employment for what had been determined a high-level breach of RA’s code of conduct.

The full-back, who has 72 hours to appeal, later issued a statement in which he said he was “saddened” by the decision but that he was “considering his options”.

Announcing the decision on Friday afternoon, Rugby Australia chief executive Raelene Castle said it was a sad day for Australian rugby but that Folau had left the governing body with no alternative than to seek termination of his contract.

“We want to stress that this outcome is a painful situation for the game,” Castle said on Friday.

“Rugby Australia did not choose to be in this situation, but Rugby Australia’s position remains that Israel, through his actions, left us with no choice but to pursue this course of action.”

“This has been an extremely challenging period for Rugby and this issue has created an unwanted distraction in an important year for the sport and for the Wallabies team.”

“When we say rugby is a game for all, we mean it. People need to feel safe and welcomed in our game regardless of their gender, race, background, religion, or sexuality.

“We thank the tribunal panel for their decision and we respect the time, consideration and expertise the panel members brought to this process.”

The three-times John Eales medallist and 73-cap Wallaby has shown no remorse for the posts and refused to take them down. Nor has he given any guarantees that he would refrain from posting similar messages again. On Wednesday, before the decision was delivered, he changed his social media profile picture from a photograph of him playing for the Waratahs to a No 1 overlaid with the words “God first”.

In his statement, Folau thanked those who had defended his right to “share his beliefs” but he believed he had the right to express his views because it was “God’s word”.

“Upholding my religious beliefs should not prevent my ability to work or play for my club and country.”

The panel, which had considered written submissions from the player’s legal team and Rugby Australia, had the option of handing out a fine or a suspension, but given Folau’s refusal to back down they chose termination.

Folau, Super Rugby’s all-time record try-scorer, is believed to have rejected a $1m settlement offered by Rugby Australia before the code of conduct hearing over a week ago in Sydney, and will now be forced out of the Australian game without financial compensation.

His immediate playing future is unclear, although it will certainly not involve his Super Rugby club NSW Waratahs or the Wallabies, who will have to mount a World Cup campaign later this year without one of their best players.

European clubs are unlikely to risk signing him, given the threat of further social media controversy. But billionaire Andrew “Twiggy” Forrest said he might be interested in bringing Folau to his new Global Rapid Rugby tournament, which begins life next year.

A return to the NRL has been ruled out by Australian Rugby League chairman Peter Beattie, although some figures in the game still believe Folau could be accepted back in the league, while the Tongan national rugby league team has indicated they would welcome him into the fold, albeit in an unpaid role.

In a church sermon at the weekend, fundamentalist Christian Folau admitted he was finding the financial drain of the case “really challenging”. Sports apparel sponsor Asics pulled out of a deal with him last week, and should Folau decide to appeal the verdict, the cost of his defence will rise even further with the case to drag on for weeks and maybe even months. – Guardian

1 America at Large: On Long Island, longing for a return to our field of dreams
2 Garry Ringrose to stay with Leinster as he signs two-year central contract
3 ‘For 25 minutes I ran out of oxygen’: Pepe Reina on his coronavirus battle
4 Fairyhouse and Punchestown festivals cancelled as National Hunt season ended
5 Wimbledon will not be held this year due to coronavirus crisis
Real news has value SUBSCRIBE

Gordon Elliott backs decision to end jumps season but rues lost opportunities 18:30
America at Large: On Long Island, longing for a return to our field of dreams 18:00
Fairyhouse and Punchestown festivals cancelled as National Hunt season ended 17:48
Wimbledon will not be held this year due to coronavirus crisis 16:51
Playoffs set to be moved again as Uefa prioritise European club competitions 15:59
Here is your handy guide to sport on television this week