Munster face old foes against backdrop of another coaching overhaul 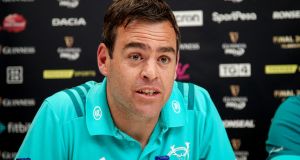 Johann van Graan: “In terms of the playing group, the management and the people involved in Munster rugby we’re going to give it everything we’ve got this weekend.” Photograph: Tommy Dickson/Inpho

Saturday’s Pro14 semi-final between Leinster and Munster will assuredly hinge largely on how the former react to their first defeat in a European final against Saracens in Newcastle. But, as ever, what to make of Munster?

Ever the drama kings, even when not in action last week Munster were still hogging headlines with the surprise end-of-season departures of assistant coaches Jerry Flannery and Felix Jones.

Against that, Joey Carbery looks set to make his first appearance at his old RDS stomping ground since starting at fullback for Leinster in last season’s semi-final, with Keith Earls, likewise last seen in their Heineken Champions Cup quarter-final win over Edinburgh six weeks ago, also back in training.

As well as a welcome week’s respite, the off-field upheaval could unhinge them or help them circle the wagons in time-honoured fashion.

However, Munster are now on the enforced look-out for two new assistant coaches as well as their stated ambition of an another experienced, attack-minded coach to complete a five-man ticket along with van Graan himself and defence coach JP Ferreira. And this is a World Cup year. All in all, Munster supporters would be entitled to ask what is going on.

“I don’t think anything is going on,” said Van Graan. “Like I’ve said before I’m very saddened and disappointed that they are going. Both of them got offered contracts and both of them are leaving for different personal reasons.

“To Munster supporters I’d say 22 players have signed on. Tadhg Beirne and Craig Casey are the latest additions. Tadhg and Joey [Carbery] signed on with another year on their contracts. All of our Irish guys who we wanted to keep we have kept, so we have an incredible group of players going forward into next season.

“That’s the most important thing for me, that the playing group must be happy and then the support staff right across the organisation are there to make sure that the players perform on the pitch and that’s what we’ll continue to do.”

Van Graan admitted it was less than ideal to see two former players jointly leave the coaching ticket – it’s not as if they come as a package. He also reiterated that Munster’s professional game board – which consists of John Kelly (chairman), Garrett Fitzgerald/Philip Quinn (currently acting CEO), John Hartery, Greg Barrett, Tom Kinirons, Killian Keane, Gilbert Little and Alan Miller – did all they could to keep Flannery and Jones.

Whether connected or not to the departure of Jones, Rob Howley had been linked with the additional coaching role.

“There’s been talk about a lot of guys, so I’m not going to respond to any names,” said Van Graan. “I’ve read about a few guys who are supposedly on some shortlist, some guys I don’t even know. We’ll follow a diligent process to get the right people at Munster.

“Both Jerry and Felix are fantastic coaches. They’re guys that I’ve trusted with my life, and both ways. We’ve worked well together, so well and I guess you guys can see from the passion in my eyes I really wanted to keep them. Unfortunately that’s not the case and you can look at the bottle as half-full or half-empty, I’m going to look at it as half-full, and we’ve got to take this team forward now.”

As to whether yet another overhaul prompted by the loss of two indigenous coaches will dilute what they’re about, Van Graan maintained: “Not at all. Obviously, it is so important for Munster to keep the Munster-ness of it.”

“But it doesn’t matter where the coaches are from as long as Munster are winning and as long as we produce players for Ireland and this club keeps moving forward,” added van Graan, who confirmed they will now be looking for three new coaches, presumably with input from IRFU performance director David Nucifora, for whom Munster must now be top of his priorities again.

“A fantastic final and all credit to Saracens. If you go through the Champions Cup unbeaten, winning by big margins in every game you’ve got to tell them, well done, you are the best team in Europe.”

As well as a week’s rest, Van Graan said both Carbery and Earls look set to start after training last week.

“They’re pretty important players and if they’re 100 per cent ready I’ll pick both of them. I believe your big players will perform in the big games and if both of them are ready I’m going to back both of them.”

The game is a sell-out and as many of the tickets went on sale publicly it remains to be seen whether the Red Army are again suffering another post-European hangover or will attend in force.

“From Munster Rugby’s point of view, we want to win a trophy and in order to win a trophy, we have to beat Leinster in the RDS,” said Van Graan. “European rugby is massive to this club with the history and what people have put into it. We spoke in here over the last two weeks and we want to take the next step and get past that in the Pro14 as well.

“That’s the only thing that’s still in our hands for this season. So in terms of the playing group, the management and the people involved in Munster rugby we’re going to give it everything we’ve got this weekend.”

‘It doesn’t bother me’ – Thomas Barr on the what ifs of Rio 07:00
Hopes of a home winner alive as Barty reaches last four 06:45
Waterford’s Bennett aware of past but looking to a better future 06:30
Owen Doyle: Breakdown of law and order in rugby must stop 06:30
All Island League meetings to hear findings of first assessment 06:30
Here is your handy guide to sport on television this week