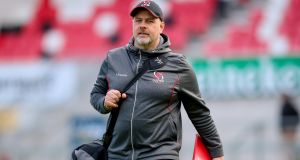 West Point, for the uninitiated, is the United States Military Academy.

Gregor Townsend took Dan McFarland to this hallowed fort on the Hudson river when they worked together at Glasgow Warriors. Exposing his forwards coach to this type of strategic expertise provoked the inevitable end of their working relationship.

So annoyed was Townsend and Scotland with Ulster and David Nucifora head-hunting McFarland that they made him miss preseason in Belfast.

Their reasoning was valid if pernickety. Imagine Ireland losing Simon Easterby or Andy Farrell to a leading Scottish club a year out from the World Cup.

The SRU made the IRFU pay the price stated in McFarland’s contract.

Despite that deal being long since done, Ulster were not supposed to reap any tangible benefits in 2019.

Not yet. Too soon. But here they are. Tomorrow evening at Scotstoun Stadium comes a rare opportunity to reach the Pro 14 final. Beat these Warriors and they return to Glasgow a week later to face Leinster or Munster.

An easy loop is to retrace McFarland’s journey since that leaders’ conference north of New York City.

“West Point is effectively a university of leadership,” said the former prop at the Guinness Pro14 media day. “I’d never done anything like that. I met a couple of psychologists when I was over there and looked at the rugby programme, the football programme, it was absolutely fascinating.

“A lot of the learning came from Gregor asking people in. We had people from rugby league, southern hemisphere rugby clubs, it was all like an open book. Coaching isn’t about secret squirrel. You only learn your own stuff doing it that way but if you share, and someone shares with you, then the onus is on you to get better. If you don’t then people catch up on you pretty quickly.”

Hidden in plain sight, the secret ingredient to great coaching – sharing. Afterwards it comes down to communicating this knowledge to iPhone-addicted millennials.

“Delivery is probably the biggest thing. In the latter years in Connacht, I did a degree in psychology and I really enjoyed the learning aspect of that but it wasn’t practical.

“As soon as I went to Glasgow, working with Matt Taylor and Kenny Murray and Gregor, we really focused on how we delivered; whether in meetings or the coaching aspect.”

Still, the coach is always hoping the words get put into practice by players.

“Or getting them to tell me what to do,” McFarland continued. “Also [I learned] from Gregor’s style of rugby. I’ve been exposed to some good coaches. Pat Lam had a very distinctive style of play and Gregor as well, he has a very clear philosophy and that’s certainly influenced how I approach my rugby philosophy.”

Offering McFarland the clean slate of Ulster after Jono Gibbes – doing just fine at La Rochelle – and Paddy Jackson – en route to London Irish – cannot be deemed a masterstroke. Not yet. Too soon. But, following nine years in Galway and three under Townsend at Glasgow then Scotland, it represents a career-defining opportunity for the 47-year-old.

“My time in Glasgow was a massive growth period. I had to leave Connacht to expand my mind and expand all the coaching stuff that I hadn’t sucked in. I didn’t even realise you could do that until Pat arrived. That was something Gregor offered straight away. His whole philosophy, his coaching mindset is about learning. Not only did I learn off Gregor and the other coaches there, but he’d also bring people into the club and during that time, the amount of information I was taking in was bewildering.

“Plus you get to meet a whole new group of players with different cultures. It was a great time. We didn’t win anything but I won a lot for myself, that’s for sure.”