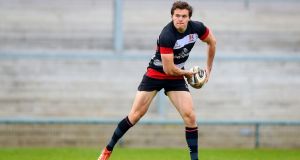 Jacob Stockdale during the captain’s run at Kingspan Stadium: the player returns at fullback for the Pro14 semi-final clash against Glasgow. Photograph: Tommy Dickson/Inpho

The return of Jacob Stockdale at fullback and Louis Ludik on the wing assuredly means Ulster take on Glasgow on their artificial pitch with even more hope and expectation as well as form than would already have been the case.

This season has, at times, demonstrated that Ulster may not have the depth of others but at other times, not least in their two previous quarter-finals in Europe and in the Guinness Pro14, they have also shown they are a serious proposition when locked and fully loaded.

There have been relatively rare days when they’ve been able to field all their main front-liners together, but when Iain Henderson, Marcell Coetzee and Stuart McCloskey – Ulster’s player of the year in the eyes of both his team-mates and supporters – are in harness, as they showed when beating Connacht two weeks ago, they have three players to consistently provide them with go-forward ball. Now with Stockdale’s X factor and Ludik back in the mix in a back three featuring the searingly quick Robert Baloucoune, they have more of a cutting edge as well.

Stockdale’s selection at fullback is very interesting. He hasn’t played since suffering a hamstring injury in the away defeat against Edinburgh a month ago, when also picked at “15” for the first time this season, but his intrusions into the line, his lines of running and his offloading all caught the eye.

It is, of course, the position he cut his teeth when a star turn for the Irish Under-20s, and a return there is a viable option both tonight and going forward, for both Ulster and Ireland.

Having overcome Connacht in the quarter-finals, Dan McFarland’s team come up against his other former employers Glasgow, where he was assistant coach for two years up until 2017. It’s a ground and, helpfully, a team he knows well.

Glasgow have won 20 of their last 22 games in this competition at Scotstoun, and whether he has been striving to remove any mental blocks about playing on this “excellent surface” in the minds of his own players – Ulster have only won there once – he maintains it should not be a factor.

“There is no doubt it’s an advantage for them because they train and play on it consistently. They enjoy training and playing on it and if you don’t train and play on that surface, then you’re not as used to it as them, but I don’t think that factor is as significant as some teams like to make out. We want to play a fast game and move the ball no less than Glasgow do and the surface allows for a consistency that means you can play that type of game,” says McFarland.

This is Glasgow Warriors’s seventh semi-final in the last eight years although they have only reached two finals, in 2014 and 2015, both semi-finals being at Scotstoun, against Munster and Ulster. Ulster are playing in their first semi-final since 2016, but the only time they have reached the final in seven previous semi-final attempts was when they beat Scarlets in Belfast in 2013.

Glasgow come into this game on a run of eight successive wins in this competition, while Ulster’s only defeat in their last nine Pro14 games was at Scotstoun in early April.

While Ulster will bring plenty of firepower, McFarland is fully aware Glasgow will too with their mix of aggressive forward play and pace aplenty in their free-scoring backs.

“The stats will tell you Glasgow’s attack is extremely potent.”

They have some world-class players in their back three – the likes of Stuart Hogg, Tommy Seymour, DTH van der Merwe, Niko Matawalu, these are all guys that can break the game.

“I’m a big admirer of Sam Johnson, he’s a terrific player, good ball player, he’s got a wicked body swerve that you don’t see coming and he’s able to beat you in a very tight space. And obviously in the halfbacks, they have Ali Price and Adam Hastings, there’s youthful exuberance there and talent in terms of picking holes.

“Athletically they’re very gifted and they play with no fear which when you have the talent they have around them, that’s potentially very dangerous. Up front their forwards have been excellent this year, they’re much stronger than they were last year and they demonstrated that against us at Scotstoun in the last day by taking penalties off us at scrum and spoiling our line-out. They scored a maul try against us which was really disappointing, so they’ve got threats everywhere.”

At face value, and with the prize of a “home” final in Celtic Park next week, Glasgow are entitled to be favourites, but with the additional motivation of wanting to extend the careers of Rory Best and Darren Cave by one more game, Ulster have more than a puncher’s chance here.