London Irish have no concerns over signing Paddy Jackson

Club ‘fairly sure’ they are comfortable with who he’ll be, says chief Brian Facer 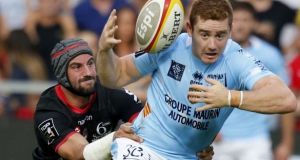 Paddy Jackson moved to France after he was let go by Ulster. Photograph: Billy Stickland/Inpho

London Irish rugby club says it has no concern over its controversial signing of former Ulster and Ireland outhalf Paddy Jackson.

“We’ll judge the man when he’s here and the way he conducts himself but I’m fairly sure we’re comfortable with who he’ll be,” said London Irish chief executive Brian Facer in the club’s first comments on the recent signing of Jackson, who has been playing this season in France with Perpignan, who were relegated from the elite Top 14 league.

Jackson moved to France after he was let go by Ulster in the wake of a high-profile rape trial. Although he was acquitted, there was considerable public disquiet and anger at details of his behaviour that emerged in evidence.

“We’ve got strict codes of conduct and obviously he’ll have to adhere to the same code of conduct that we do off the field and on the field,” the London Irish boss said.

London Irish has recently secured a return to the lucrative top flight of English rugby, the Gallagher Premiership.

With money from a recent £230 million (€263 million) investment by private equity group CVC in the premiership, it has embarked on an ambitious hiring strategy.

Apart from Jackson, Irish flanker Seán O’Brien is joining the club for next season along with All Black winger Waisake Naholo and Australian Test prop Sekope Kepu.

“We don’t want to comment about his past and where he is because that was settled by a judicial court,” said Mr Facer. “I totally understand that people will have different opinions about how that went and didn’t go and we respect everybody’s opinion but, from our point of view, we want the best players at the best time to give us that best chance.

“He’s still a player that’s in his prime, who’s one of the best players of that position in the world so, for us, it’s all about the rugby and the ability for him to play for us,” said Mr Facer. “We’re a club that’s built on good values anyway so it’s all about fitting into the culture and the way we are now.”

1 Owen Doyle: Creeping professionalism of schools rugby a threat to the game
2 Caroline Wozniacki’s career ends with defeat to Ons Jabeur
3 Niall Quinn happy to step into the breach at FAI
4 GAA officials and referees brace themselves as new rules kick in, and this time it's for real
5 Scotland’s Finn Russell missed training after Sunday drinking session
Real news has value SUBSCRIBE