Ulster centre has been outstanding, but he needs to convince Joe Schmidt 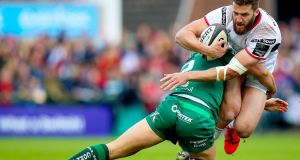 Perusing the Pro14 statistics from an Irish perspective ahead of the weekend’s semi-final matches, one name – Stuart McCloskey – is at, or near, the top of several categories. The 26-year-old Ulster centre, who won the last of his three Ireland caps against the USA last November, has been outstanding for Dan McFarland’s team, and it’s easy to see why he is beloved by teammates, coaches and supporters.

The challenge for the six-foot-four inside centre has been to persuade Ireland’s head coach, Joe Schmidt, that he possesses the skill sets and aptitude to play international rugby on a regular basis. He is in conventional terms behind Robbie Henshaw and Bundee Aki for the green number 12 jersey.

In a Rugby World Cup year and with the constraints in terms of the squad numbers travelling to Japan, versatility is a cherished attribute, so players who are niche in terms of position have to be a cut above their rivals.

His honesty will undoubtedly assist in his continued development. Schmidt will have provided the specifics in the areas in which McCloskey needs to improve. This season the centre has played 25 matches for Ulster, all seven in a run to the Champions Cup quarter-final and 18 Pro14 games, a statistic that demonstrates remarkable durability for a player who carries a substantial workload.

The quality of that contribution is revealed across several metrics, of which one of the most eye-catching is 211 carries; he is one of only two players, along with Edinburgh’s Fijian number eight Bill Mata, to pass the 200 benchmark.

He’s been a model of consistency and on Friday night – unlike Connacht centre Tom Farrell who has also had a fine season – gets another opportunity to enhance his reputation in the tough environment of Scotstoun.

I wanted Stu to get in between a couple of ball players, but challenge him to be a ball player as well

McCloskey is a physical handful, gets over gain-lines, gets his hands free in the tackle and can be an immoveable object at the breakdown. The challenge has been to improve his range of passing, his defensive reads and decision-making sufficiently to convince Schmidt that he warrants a couple of runs during Ireland’s World Cup warm-up matches in August.

Schmidt said ahead of awarding McCloskey a third cap in November: “I wanted Stu to get in between a couple of ball players, but challenge him to be a ball player as well. I think we know he’s a ball carrier, we know how strong he is.”

The majority of the Irish front-line players have participated in far fewer Pro14 games and therefore don’t feature prominently in terms of the official stats, but one player who bucks that assertion is Munster captain Peter O’Mahony, who appears in the top 25, underlining the quality of his contributions.

The second semi-final between Leinster and Munster at the RDS on Saturday afternoon has been described as a quasi “final trial” in jostling for primacy in the pecking order for an Ireland World Cup squad, and there’s little doubt that, placing the outcome to one side for a moment, the individual tussles will be worth the admission price.

Joey Carbery and Keith Earls seem set to return, while Leinster’s matchday 23 will be governed by legacy issues from the wear and tear of their Champions Cup final defeat to Saracens. Both sets of supporters – and, one presumes, Joe Schmidt – would prefer the teams to be close to full strength, tying up nicely all the strands of what promises to be a cracking encounter.