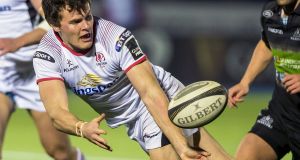 Though the odds looked stacked against them, Ulster are, nevertheless, in buoyant mood ahead of tomorrow’s Pro14 semi-final at Glasgow Warriors and their confidence has been further bolstered by the likely return of both Jacob Stockdale and Louis Ludik.

Stockdale has been out with a hamstring injury since limping off at the end of last month’s stirring victory in Edinburgh, a result which secured Ulster knockout rugby in the league for the first time since 2016 ahead of them then overcoming Connacht in Belfast to set up this week’s last four trip to Scotstoun.

The Ireland winger has missed Ulster’s last two games – the dead rubber win over Leinster and the play-off result with Connacht – and his expected return will be a huge boost for head coach Dan McFarland’s hopes of pulling off a shock result to make the Celtic Park final from his first season in charge.

Stockdale’s presence, whether at full-back or wing, will bring extra attacking edge to former Warriors assistant coach McFarland’s plans, on the fast artificial track at Scotstoun, while Ludik’s playmaking ability and defensive nous could also provide added edge for the visitors against the threats of Stuart Hogg and ex-Ulster player Tommy Seymour.

The 32-year-old South African utility back has not played since limping off with what was thought to be a season-ending knee injury against the Southern Kings back at the end of March.

Not of a mind to give too much away, McFarland said that both players could be available for Glasgow. Should Ludik get the nod, he will either slot in at fullback or wing, presumably depending on wherever Stockdale is expected to start. “He’s reintegrating and we’d be hopeful,” the Ulster head coach said about Stockdale’s chances while on Ludik he added, “He’s made steady progress so there’s potential he might be available too.”

McFarland also wasn’t up for subscribing to the notion that the Warriors -–without a game for nearly three weeks – might be ambushed in the same way as last season when the Scarlets triumphed at Scotstoun after Glasgow had again sat out time awaiting their semi-final opponents. “Glasgow won’t be undercooked,” he insisted. “Dave Rennie is a championship winning coach and he won’t make that mistake again. They’ll definitely not be undercooked.”

Another factor adding motivation for Ulster – who have not won a title since 2006 – will be that Rory Best has a maximum of two games left for the province while Darren Cave, if involved, will equal Andrew Trimble’s record of 229 appearances as he plays out his last season as well.

The portents certainly don’t look too promising against a Glasgow side who have only lost twice at home this season in all competitions.

Ulster’s last visit to Scotstoun was last month’s heavy defeat which, admittedly, came only six days after they exited Europe against Leinster while, knockout-wise, the then Neil Doak-coached side crashed out in the league semi-final of 2015 courtesy of a late DTH van der Merwe try and Finn Russell’s touchline conversion.