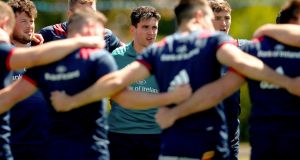 With the Six Nations a distant memory, and the Champions Cup done and dusted, there’s just one more bit of business to attend to before the eyes of the rugby world turn towards Japan.

Four teams remain in the 2018-19 Pro14 - three of them Irish - with Leinster, Munster, Ulster and Glasgow bidding to be crowned champions at Celtic Park on May 26th.

This weekend sees the semi-finals unfold and one fixture in particular grabs the eye - the latest instalment of the Leinster-Munster rivalry in Dublin.

In the blue corner stand the defending champions. With their European crown already ripped away by Saracens, Leinster can salvage their season somewhat by maintaining their domestic dominance. There’s no time for a hangover - they have to win.

And in the red corner are the challengers, without silverware since 2011 but steadily improving under Johann van Graan. Victory over the old enemy would signal a coming of age - defeat would see Munster clatter back down off the glass ceiling once again.

There is a huge amount at stake for both sides on Saturday - and here is everything you need to know before the penultimate fixtures in this year’s Pro14.

The semi-finals of the Pro14, with Leinster taking on Munster and Ulster travelling to face Glasgow.

Ulster take on Glasgow on Friday May 17th (Scotstoun, kick-off 7.35pm) with Leinster-Munster on Saturday May 18th (RDS Arena, 2.30pm).

And, as ever, you will be able to follow all of the action in Saturday’s interprovincial clash via the Irish Times liveblog, which will be up and running from around 1.45pm.

There are still a number of tickets available for Saturday’s clash at the RDS - you can purchase one HERE.

Predictably, Leinster romped their way through the Pro14 season, winning 15 and drawing one of their 21 fixtures to sit well clear at the top of Conference B - thus guaranteeing top spot.

Munster enjoyed a fine domestic campaign, winning 16 of their 21 fixtures, but finishing second to Glasgow by virtue of having earned fewer bonus points in Conference A. They then played a quarter-final against Benetton Treviso - the surprise package of this year’s competition - and rode their luck somewhat en-route to a narrow 15-13 win at Thomond Park.

A resurgent Ulster finished a comfortable second in Conference B - without ever threatening to knock Leinster off their perch. As with Munster, the runners-up spot meant they had a home quarter-final to negotiate, and Dan McFarland’s men battled to a 21-13 win over Connacht at Ravenhill.

Dave Rennie’s side have had the misfortune of bumping into Saracens around every corner in the Champions Cup - losing to them three times in this year’s competition - but they have been supreme in the Pro14. The Scottish side won 16 of their 21 fixtures to top Conference A and accrued 81 points - more than any other side.

MUNSTER
Joey Carbery lined up in this fixture last year but he was wearing the blue of Leinster. This time he will direct operations in the red of Munster. CJ Stander will start at openside with Arno Botha named at number eight in a bulky backrow.

ULSTER
Dan McFarland announced his Ulster team on Thursday, with Jacob Stockdale returning from a hamstring injury to start on the wing.

On May 19th 2018 Leinster squeezed out Munster at the same stage of the competition, winning 16-15 at the RDS. Carbery was on the winning side that day - but on Saturday he returns to try to raid his old stomping ground.

And while he has happy memories of Leinster - there’s no doubting where his loyalties lie now: “I love it down here. I love the people, they’ve made me feel very welcome and I’m loving playing rugby down here as well. The potential is roofless – we can get wherever we want to. It will take work, it will take time, but it’s something we’ve definitely got.”

“Defeat for Leinster would brand 2018/19 as failure. That’s how Leo Cullen and the players would view it.

“Defeat for Munster represents stagnation. Another semi-final loss to be filed away in the “not good enough” or “regrets” cabinet.”

It is just over a decade since Leinster and Munster met in the 2009 Heineken Cup semi-finals at Croke Park - drawing a staggering crowd of 82,208. Leinster’s 25-6 win heralded the start of their era of dominance, as they were crowned champions of Europe a few weeks later. Could a Munster win on Saturday prove a catalyst for success for van Graan’s men?

And what about to win the Pro14?

Expect a calm evening in Glasgow on Friday - around 13 degrees and still - perfect for rugby.

In Dublin, where the weather has been sublime all week, rain is forecast for much of the day on Saturday. Typical.

Three provinces in the semi-finals? I like those odds.

Glasgow to lift the trophy in Glasgow? Surely it’s written in the stars. . .

1 David Clifford sends everyone back to their corners unbeaten
2 Six Nations: Ireland are contenders but England still the team to beat
3 Welcome to Iten in Kenya – home of champions and cheats
4 In Donegal Michael Murphy is seen, simply, as a godsend
5 Mike Catt hopes to have Irish backs purring in Six Nations
Real news has value SUBSCRIBE