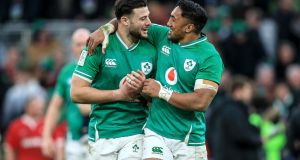 Ireland’s Robbie Henshaw and Bundee Aki celebrate after their win against Wales in the Guinness Six Nations Championship Round 2 match at the Aviva Stadium, Dublin on February 8th. Photograph: Gary Carr/Inpho

Robbie Henshaw and Bundee Aki have fostered a great understanding that transcends their relationship on the rugby pitch with Connacht and Ireland – as the latter demonstrated when nimbly offloading a number of questions with a quick nod. It’s all about the communication skills, no matter what the environment.

They are likely to resume their centre partnership when Ireland face England at Twickenham on Sunday afternoon (3.0) and will hope that it endures to the final whistle, unlike the Welsh match when Henshaw was forced off with a head injury after 44 minutes.

The Leinster centre was enjoying a storming game at the time and has since followed and passed all the return-to-play protocols, resuming training last week in Cork. Henshaw and Aki were at the centre of Connacht’s Pro12 triumph in 2016 but, in a green jersey of a different shade, they have started just eight matches as Ireland’s midfield axis and only three in the Six Nations: against France and Italy in 2018 and the game against Wales last Saturday week.

It’s been a while since Henshaw lined out against England in a Six Nations game because of injury and circumstance, three years to be precise (2017), having previously played in 2015 and 2016. He missed out on Ireland’s Grand Slam triumph at Twickenham in 2018, unlike Aki, who was part of Ireland’s midfield that day and again at the Aviva stadium last season.

The last two games with England, we’ve had a bit of a spanking so we need to focus on ourselves

England head coach Eddie Jones has added a fit-again Manu Tuilagi – he damaged a groin early on in the defeat to France and missed the Scotland match – and Henry Slade to the centre options for Sunday’s game that include captain Owen Farrell and Jonathan Joseph.

Tuilagi is no stranger to Aki, the pair having first met on the field over a decade ago when Aki, on a scholarship to Truro College, came up against the English centre, who was playing on the wing that day for John Cleveland College. He said: “We have to make sure we bring our ‘A’ game. Henry and Manu are world-class players.

“Manu is a big man, a strong man. He plays a big part in the way they play, Owen Farrell and George Ford too, [controlling] the game. Manu is a massive threat, Henry Slade too. The last two games with them [England], we’ve had a bit of a spanking so we need to focus on ourselves.”

Throughout the 20 minutes or so conversation, there is a recurring tone and theme to the sentiments expressed by the Irish midfield. The emphasis this week and last has been insular to a large degree, focusing on what Ireland need to get right at Twickenham and exploring the avenues to best realise that ambition.

The other aspect is working in units in terms of position, something that Ireland head coach Andy Farrell has stressed to improve the collective. Aki elaborated: “I think it’s just the relationship, all of us as centres have a good connection between us as a group.

We know each other very well. He texts me non-stop anyway, so I can’t get away from him even if I wanted to

“We’re always doing videos together, helping each other out as best we can and preparing each other as well as we can. Stuey [Stuart McCloskey] and Chris Farrell as well, when they’re on the pitch we do our best to prepare each other. Unfortunately, Ringer’s [Garry Ringrose] not here, he’s another class player. It’s important we gel as a group when we’re in. That’s the main message we got from Andy Farrell: making sure we help each other out to be the best we can.”

It was time to shift the spotlight onto first impressions, and Aki was asked to recall his initial impressions of Henshaw on arriving to Connacht. He said: “Obviously when I first saw him I knew straight away I could learn a lot from this young fella. Like you said, he was an unbelievable player, still young, still raw, still learning and, for me, I just knew I could learn off him and to this day I still am. He’s been one of the best centres out there.

“We know each other very well. He texts me non-stop anyway, so I can’t get away from him even if I wanted to [laughs]. I think the good thing about it is that whenever we’re on the field, we know each other inside out, we know what we’re capable of doing and we read each other really well.”

Henshaw was then asked about the method of communication in the heat of a match: hand signals, shouting or key words? He replied: “A bit of everything, really. When your heart rate is up to 180 or whatever it is in the game, and you’re out of breath, it’s hard to scream so it’s a bit of being able to adapt by sight and by [the way] that you’ve trained.”

The progression from Ireland’s performance against Scotland to the display against Wales will need to be replicated in terms of improvement if they’re to be successful at Twickenham on Sunday. Recent games against England have confirmed that absolute necessity of getting off to a good start, because they’ve endured the flip side in the last two matches, last season’s Six Nations and the World Cup warm-up in London.

If Ireland are to succeed then expect Aki and Henshaw to be front and centre in any triumph.