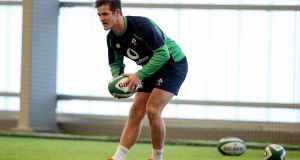 Billy Burns will start for Ulster after having his first taste of international duty. Photo: Bryan Keane/Inpho

Louis Ludik has returned from injury and has been selected to start for Ulster when they face Ospreys.

Ludik will start on the left wing and is joined in the back three by fullback Matt Faddes and Robert Baloucoune, who re-joins the Ulster squad following his involvement in the development group which trained alongside the Irish squad in the build-up to the Six Nations.

Stuart McCloskey has been released from the Ireland squad and is paired with Luke Marshall in midfield. Billy Burns has also been released from international duties and will start at outhalf alongside David Shanahan who comes in to start at scrumhalf.

In the front row, Eric O’Sullivan will start at loosehead prop, Adam McBurney is selected at hooker, and Marty Moore returns to the tighthead position. Alan O’Connor will lead the side from the second row and is partnered with Kieran Treadwell. Matthew Rea and Sean Reidy – who both recently signed two-year contract extensions with the province – start in the back row alongside number eight, Marcell Coetzee.

Jack McGrath and Tom O’Toole, who are also part of Ireland’s Six Nations squad, are named among the forward reinforcements with John Andrew, David O’Connor and Jordi Murphy. Providing back line cover are Jonny Stewart, Bill Johnston and Craig Gilroy.