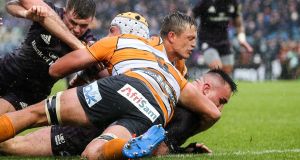 Leinster hooker Rónan Kelleher scores a try during their Guinness Pro14 victory over Cheetahs at the RDS. Photograph: Tommy Dickson/Inpho

The Irish squad will return to camp this evening in the countdown to next Sunday’s Six Nations meeting at Twickenham, with those who returned to their provinces having emerged seemingly unscathed from Pro14 action over the weekend.

The IRFU will announce an updated squad this afternoon which should see all or pretty much all of those 13 players rejoin the 23 players who took part in last week’s two-day camp in Cork. Andy Farrell will confirm the starting XV and replacements on Wednesday.

The Ireland head coach wanted to see those players involved over the weekend stake their claims, and many would have done so. For example, the Connacht hooker Dave Heffernan produced a man of the match performance and scored the first of their four tries in a significant 29-0 win over the Cardiff Blues at the Sportsground on Saturday.

However, like others, it will be difficult for Heffernan to force his way into the match-day 23 at Twickenham, with Rónan Kelleher also featuring strongly in Leinster’s 36-12 win over the Cheetahs amid some of the worst excesses of Storm Dennis at the RDS.

Indeed, all the signs are that the only change to the Irish 23 may well see Caelan Doris named on the bench ahead of Max Deegan with the former recovering from the concussion which ended his debut against Scotland prematurely and ruled him out of the win over Wales.

The starting Irish backrow of Peter O’Mahony, Josh van der Flier and CJ Stander seems set to be retained, all the more so given the strength of Sam Underhill and converted number eight Tom Curry at the breakdown was such an influential factor in England’s win over Scotland in Murrayfield.

“Yeah, the backrow is a big strength of their game, very dynamic ball carriers and the work rate is phenomenal of those guys,” said Farrell last week. “But we think ours has been pretty good of late as well.”

Speaking about the Irish backrow, Farrell said: “Pete’s performance has been a reaction in an unbelievably positive way to being on the bench and everyone had wrote CJ off, didn’t they? And we’ve seen what he’s done. That’s competition, that’s what they do, they’re professional athletes and they rise to these types of challenges and we expect them to be in the same place next week.”

England have won the last two meetings, derailing Ireland’s Six Nations in last year’s opener at the Aviva Stadium before the thrashing them in the World Cup warm-up at Twickenham last September.

“I think it doesn’t really matter what has happened in the last two games because they’ll see this as the competition, won’t they?” said Farrell.

“When you lose one game in the Six Nations, everyone knows that you’re still in the competition, so they’ll see this as their main focus and we’ll expect them to be at their 100 per cent best.”

Manu Tuilagi is expected to return to the English midfield after recovering from the groin injury which forced him off in the 15th minute of their opening loss away to France. Exeter centre Henry Slade is also back in the England camp after fracturing his ankle in December, but Anthony Watson is still sidelined.