Cian Healy’s hunger for battle undiminished by the years 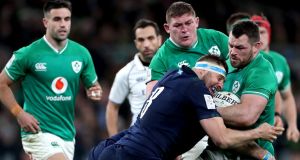 Cian Healy in action against Scotland: “You’d be watching how he [O’Connell] played, you can see a lot of it in the way James Ryan is as a ball-carrier, that front-foot stuff. If someone does that in a team, that’s infectious.” Photograph: James Crombie/Inpho

“One look from those eyes,” as Ronan O’Gara put it when describing how Paul O’Connell could successfully demand more from a player.

The bulk of the Irish squad who will seek a Triple Crown when facing England in Twickenham this Sunday (kick-off 3pm) have played with the former Munster, Ireland and Lions squad, 14 of them to be precise, and hence know well what O’Gara means.

Cian Healy broke into the Irish team in 2009 and so played with O’Connell for six years, but the menacing glare remained until what proved to be the latter’s enforced finale at the 2015 World Cup.

“He was very approachable, laughing and giggling and all that,” said Healy on first encountering O’Connell, “but if you messed up in lineouts there was a death stare. That’s the worst.”

This thought provoked one specific memory.

“Actually, at the last [2015] World Cup I messed up three in a row, I got the death stare (after the first) and then I had a panic attack,” he recalled in reference to him messing up the first two, and then, after the third “lineouts was canned. I was brought off to the side by the doc, and the lads were just staring. So that’s the height of that one.”

The moral of the story.

In actual fact, Healy believes O’Connell’s presence is even more beneficial for the younger squad members who have not played with him.

“I’ve only been shooting the breeze with him, I haven’t got into his mindset yet but I do plan to. It’s great having him here for some of the lads who haven’t played with him and who wouldn’t understand what he brought to a group. That’s what lads are doing, sitting down and picking his brains a bit. He’s one of the foremen of what it means to be Irish, the way he played and the way he held himself so that’s good for those who didn’t play with him before.”

There may be less need for the kind of rousing leadership O’Connell famously brought, although there’s still a place for it in smaller doses according to Healy.

“Yeah, he was a high emotional builder. Everyone has seen the old videos of his speeches and stuff. There’s part of that but there’s not so much of that anymore. Now, it’s very technical and calm-headed but you do have the little chats to spark that fire and once it’s sparked and ready, you leave it go and the rest of it has to be cool-headed about the job in hand and making sure everything’s on song.”

Then there were the standards which O’Connell, who must be regarded as Ireland’s greatest ever lock, set on the pitch – when at times he could almost bend games to his will.

“You’d be watching how he played, you can see a lot of it in the way James Ryan is as a ball-carrier, that front-foot stuff. If someone does that in a team, that’s infectious, it gets everyone doing that,” says Healy, perhaps paying Ryan the ultimate compliment.

“You see when opposition defences are hitting you back and hitting you back, you end up having more soaks and more collisions lost. But when you’re on that front foot and someone starts it, goes through that line first, then you’re on top and you’re the ones winning the collisions, you’re the ones over the line. There’s a couple of people like that that put their teams into those positions and he would have been one of them.

“There’s people like that across the board and I think it’s good for every team to have a couple of people like that who bring that, whether it’s a mindset or a complete disregard for their body. It’s one or the other, and those people are people who drag a team forward with them.”

One ventures that Sexton probably had a say in bringing O’Connell into the Irish high performance centre this week, and Healy gave an insight into some of Sexton’s approach as the new captain.

“Mainly what we talk about as a group would be our family travelling and the people who are close to us travelling and their direct representation, and then the broader representation of the people everywhere tuning in. It’s not only the people in the UK tuning in, it’s the Irish everywhere across the world. You know that they all tune in as well, so there’s a huge weight that that carries but that’s a good weight to have on you. It’s a supportive weight and it’s something enjoyable.”

Healy still thrives off playing for Ireland and all the enjoyable weight that goes with it. Having already won three titles, including a Grand Slam, this 11th Six Nations campaign could be truly special for him, as the prop is currently on course to win his 100th cap on the final Saturday in Paris.