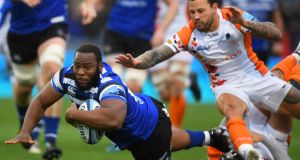 England are facing escalating problems at prop after Beno Obano was called into Eddie Jones’s training squad ahead of Sunday’s Six Nations clash with Ireland.

Obano has been summoned to the team’s base in Surrey as cover for either Joe Marler or Ellis Genge, with Jones refusing to specify which loosehead has become a doubt for the Twickenham showdown.

The news comes two days after Mako Vunipola was ruled out of the round three fixture for family reasons that have forced his return to Tonga.

Obano returned to his club Bath on Wednesday after becoming one of the six players culled from England’s 33-man squad, but has been summoned back to England’s camp and will train on Thursday afternoon.

If Marler or Genge do fail to recover in time, then Obano will make his Test debut against Ireland.

“Beno’s on the freight train, just in as a bit of cover. As I said we’ve got a few niggles so we just needed an extra prop in there,” Jones said.