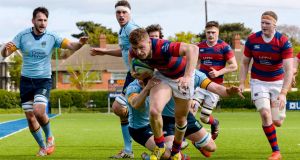 Clontarf’s Michael Brown makes a break for the line to score a try against UCD in the Ulster Bank League Division 1A game at Castle Avenue. Photograph: Tom Beary/Inpho

Next weekend’s semi-final clashes will pit Lansdowne against Cork Constitution, who will defend their Bateman Cup title at Old Belvedere the following Saturday, and Clontarf will host Young Munster at Castle Avenue.

Lansdowne finished top of the pile on scoring difference following their 40-17 bonus-point dismissal of Garryowen whose top flight survival rests on the upcoming promotion/relegation playoffs.

The headquarters club were winless in the last four rounds but with Scott Deasy back at outhalf, they led from the second minute onwards thanks to flanker Charlie Butterworth’s early try on the Aviva Stadium’s back pitch.

Lansdowne had the bonus point secured by half-time, current Ireland Under-20 hooker Tadgh McElroy touching down as the hosts built a 28-3 lead.

Lansdowne made sure they had the final say with two closing tries from back-three regulars Daniel McEvoy – the division’s top try scorer with 11 touchdowns – and Eamonn Mills.

The north Dubliners were 21-15 down at half-time, with Josh Murphy, Ciaran Frawley and Andy Marks notching tries for the students who were brimming with confidence after last week’s Colours success.

Tarf got on top in the third quarter, moving ahead thanks to converted tries from centre O’Brien and outhalf David Joyce, who also kicked 12 points. A deserved try for workhorse flanker Tony Ryan, coupled with a Joyce penalty, make it 27 points without reply, before UCD’s Leinster-capped prop Andrew Porter had a late consolation score.

Down at Temple Hill, there were tries aplenty too as Cork Con got the better of St Mary’s College on a 34-27 scoreline. Backs Ned Hodson and Michael Clune bagged braces for the victors.

Dublin University clawed clear of the relegation zone with a stunning last-minute try from Tim Maupin who saw them overcome Terenure College 27-25 at College Park.

The students, who were bidding to stay up at the end of their first season in Division 1A, were turned over in the dying minutes and saw Nure kick clear downfield. However, the Trinity backs had other ideas, countering at pace from their own 22 and putting USA international Maupin into space out wide for the game’s decisive score.

Trinity director of rugby Tony Smeeth, whose young side finished sixth in the table, beamed afterwards: “It was just unbelievable. I can’t describe it really. I didn’t think we were going to win. That was the try of the year that last one. You won’t see many tries better than that in College Park.”

Despite going down to that late try, Terenure also maintained their top flight status by finishing eighth overall – just a point above relegation-threatened Garryowen. Former Leinster winger Sam Coghlan Murray was one of their three try scorers.

Tynan kicked four conversions to add to a try double from prop Paul Allen in the second half, but their efforts were not enough to snatch home advantage in the playoffs. Belvo bowed out of the top flight with tries from scrumhalf Kyle McCarthy and replacement Eddie Weaver.