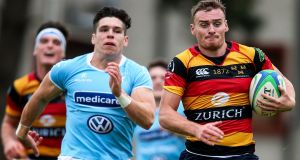 Table-toppers Lansdowne and defending champions Clontarf will have home advantage in the Division 1A semi-finals after a tumultuous final day in the Ulster Bank League.

Next weekend’s semi-final clashes will pit Lansdowne against fourth-placed Cork Constitution, who will defend their Bateman Cup title at Old Belvedere the following Saturday, while Clontarf will host third-ranked Young Munster at Castle Avenue.

With top-scoring winger Daniel McEvoy notching his 11th league try, Lansdowne finished top of the pile on scoring difference following their 40-17 bonus-point dismissal of lowly Garryowen, who will host Old Wesley in a playoff next Sunday.

Dublin University clawed their way clear of the relegation zone with Tim Maupin’s stunning last-minute try, which started in their own 22, earning them a 27-25 win over Terenure College.

Trinity director of rugby Tony Smeeth, whose young side finished sixth in their first season in the top flight, beamed afterwards: “It was just unbelievable. I can’t describe it really. I didn’t think we were going to win. That was the try of the year that last one. You won’t see many tries better than that in College Park.”

Meanwhile, new Division 1B champions Buccaneers hammered Ballynahinch 40-10 at Dubarry Park. Number eight and captain Kolo Kiripati kicked a conversion in his final game for the club and prolific winger Jordan Conroy scored his 18th try of a stellar campaign.

Rodger McBurney’s first-half try guided Ballymena to a 13-10 home win over Shannon and Division 1B safety, while the losing bonus point ensured an eighth-place finish for the Limerick men. Naas relegated Galwegians with a 27-16 defeat in Glenina, Johne Murphy’s side securing a second-place finish and a home playoff against UL Bohemians

Banbridge were crowned Division 2A champions and secured promotion in some style with a 40-12 triumph at Sunday’s Well. It is Bann first’s league title since their Ulster Qualifying League One success of 1998.

1 LeBron James among those to slam Drew Brees’ anthem comments
2 How a GAA club sprang up in east Belfast over Sunday breakfast
3 GAA players spend just 2.5 seconds within 2m of each other during play
4 Eoin Murchan on being the wrong player in the right place at the right time
5 Ryan Wylie finds the real meaning of team on the front line
Real news has value SUBSCRIBE