Leinster not for bending and Connacht are not for turning 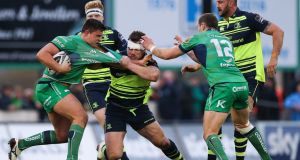 Nearing the hour mark, and trailing 27-24, Connacht outhalf Jack Carty retrieved possession under his own posts and his team-mates regrouped and recycled the ball. Kieran Marmion took his time, and fed Danie Poolman, the winger standing at first receiver and inches from his own in-goal area. Time to kick? Nah, this is Connacht.

There seemed nothing else on. But Poolman feinted past one onrushing defender passed wide to their Fijian replacement flanker Naulia Dawai. He was still two yards behind his own try-line, but ran up to Barry Daly, stepped him on the outside, scampered along the touchline, took Ross Byrne’s tackled, and offloaded inside to Tiernan O’Halloran.

The Connacht fullback, whose goose-stepping, side-stepping, eye-for-space, metre-gobbling performance (he made 149 metres from his 20 carries, with three clean breaks) was worth the admission money alone, gathered above his head without breaking stride and chipped over the advancing Zane Kirchner.

As Adam Byrne covered across from the other wing, and O’Halloran and Poolman chased, the ball bounced cruelly over the touchline. Had it taken a more wicked bounce infield to O’Halloran, it would assuredly have led to the try of the season, or perhaps any other season.

From the Clan Terrace and everywhere else in the 8,090 crowd, there was only applause. Connacht’s ambition was unrelenting. Soon the home fans broke into The Fields of Athenry.

As one tweet put it, you had to be a little bit dead inside not to enjoy a thrill-a-minute game like this one.

By then, the lead had changed hands seven times in a wild, madcap rollercoaster of a game, although it would not do so again. Ten minutes later, Denis Buckley threw out a wild, no-look pass which Daly picked off for a long-range intercept try, as Adam Byrne had done in the first-half when intercepting Craig Ronaldson’s no-look pass.

Connacht did score two wonderful tries. O’Halloran’s outside break and then his breathtaking, out-the-back offload when double-tackled had made the inroads for each, with Carty, full of tricks all night, creating both with a deft cross-kick to Poolman and skip-pass to the livewire Dave Heffernan.

But after that second try, and true to their ambitious exit strategy in seeking a double whammy, Dawai’s attempted offload to Craig Ronaldson was batted out of his hand by Rory O’Loughlin, ultimately leading to the match-winning try by Rhys Ruddock, who led this fired-up mixture of baby Blues, veteran Blues and departing Blues.

He was immense again here, once more demonstrating that an old dog can learn new tricks with 20 carries, often in the outside channels, for 61 metres, and four offloads.

“I said in the changing-room there, we’re all privileged to be part of history here,” said Lam. “He’s a credit to Connacht, he’s a credit to Ireland, he’s a credit to Portumna and to his family. He’s from a close, farming family and for me personally it’s one of the highlights of my time here, just my friendship with him and everything you’re trying to build; you just look at him and follow him. As I said to the guys before the game ‘all I need is 15 John Muldoons as far as attitude and effort, and that will give us a chance’. If you look at his 300 games, I doubt you’d count too many where he wasn’t giving it all.”

By the same token, the unrelenting pressure exerted by Leinster’s outside-in, fast-up defence could also be said to have earned them three of their five tries. Connacht’s own failure to even pick up a bonus point meant Cardiff’s bonus point win over the Ospreys put them above Lam’s side by a point in the jostling for the European Champions Cup playoffs.

Curiously, indeed inexplicably, the latter route offers the carrot of a home final in the playoffs, whereas the former would consign them to an away final. In other words, if the two Pro12 teams won their semi-finals, the lower ranked team would be at home in the final, and thus it might serve Connacht better to finish below Cardiff, or, of course, vice versa.

Go figure. It makes no sense.

As things stand, Connacht’s likely English opposition would come from Harlequins, Northampton or Gloucester. The other semi-final could see Cardiff away to any one of seven clubs, given that only one point separates Stade Francais in fifth from Brive in 11th.

Niyi Adeolokun’s hamstring injury adds to their woes, while Eoin McKeon and Quinn Roux failed HIAs. But Marnitz Boshoff, Darragh Leader and Cian Kelleher are returning, and the next few weeks affords Connacht the chance to better manage key players.

“We’ve got to check the injuries and stuff now, but certainly our minimum goal is Champions Cup rugby,” said Lam, who noted that Cardiff now face Zebre and the Dragons. “Most likely now, even if we beat Scarlets and Munster, it looks like we go to England and have a chance to come back here, and have a last game here.”

Come what may, Lam said they will assiduously go through their mistakes and seek to learn from them, with the blame for those loose passes by Ronaldson and Buckley down to the lack of communication from those outside them.

Even as champions, Connacht made more errors than anyone else in the Guinness Pro12 last season. Here again, Connacht lived by the sword, and died by it. But they are not for turning.