Munster get the better of Ulster in sloppy derby date 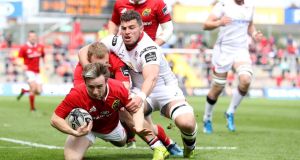 Munster avoid losing a game Ulster couldn’t win if they were to keep playing all night long.

Maybe the stakes were too low. Munster knew they could coast into a home semi-final of the Pro 12 as they have Treviso between this match and their final tie against Connacht. Ulster now know victory next weekend away to the Ospreys, who lost to Cardiff, should see them safely into the playoffs.

So, the end of season edginess looks a few weeks off as Munster’s faithful plan the journey up to Dublin next Saturday to shout down the mighty Saracens, one reason perhaps for such a poor attendance here.

Such a monumental challenge couldn’t but hover over this fixture.

But this old interpro in a new era failed to catch fire. The willingness was there but concentration levels, which now seem exclusive to European action, were notably absent.

Buckets of sloppy rugby then. Ulster initially shaped well, out-carrying Munster 54 to 21 in the opening 30 minutes, but entering first-half injury time they were desperately defending their try line with the scoreboard reading 10-10.

The dominant Munster scrum couldn’t find a way over but Rassie Erasmus will have seen plenty of ways to improve before the English champions seek to steamroll them.

Ulster had a try within four minutes; Rory Best piloting the lineout maul over. It came far too easily. Saracens will have noticed.

Darren Sweetnam had already departed, having been sparked after contact with Charles Piutau when contesting Ian Keatley’s kick-off.

Keatley was a late replacement for Tyler Bleyendaal who “completed return to play protocols following concussion sustained against Glasgow” but felt sick this morning and was benched. Seemingly, Bleyendaal’s illness was not concussion-related so he could still feature in the matchday squad. He replaced Keatley on 43 minutes and guided Munster home.

Donnacha Ryan was also passed fit to play despite the programme stating he was out of the game with concussion (that interview also confirmed his departure this summer).

Anyway, Sweetnam was helped off as Andrew Conway arrived to help Simon Zebo field some early Ruan Pienaar probes. Zebo showed well and after one such catch Peter O’Mahony was sent charging up the short side.

After combining with Keith Earls, O’Mahony put Angus Lloyd over for the opening Munster try on six minutes.

Lloyd, the Blackrock scrumhalf on loan from Ulster, was another late call-up for Duncan Williams (groin). Munster were taking no chances with Williams as a date for Conor Murray’s return remains unclear.

Paddy Jackson made it 10-7 after Francis Saili was whistled for offside by Marius Mitrea.

Jackson missed another penalty before the break as Keatley rewarded Munster’s scrummaging to level it up.

Ulster look a team drained of confidence. Even Piutau. The usually dazzling All Black wing must be unfit. He last 60 minutes. When Jacob Stockdale did puncture the red line Mitrea ruled out the try due to Luke Marshall’s forward pass.

But Ulster were not done. Pienaar threw a delicious pass to put Andrew Trimble sprinting into open field. After O’Mahony killed the ball, Jackson made it 13-10 to the visitors.

Inaccuracy undid them. An already creaking Ulster lineout – O’Mahony was all over their jumpers – offered Munster a route to victory when Rob Herring replaced a wounded Best.

Handling errors spoiled any chance of a cohesive second half. Even Pienaar’s kicking radar malfunctioned. A box kick that rolled dead finally prompted Munster into winning this bloodless affair. Saili lit the fuse, fending off Trimble then offloading for Earls to finish.

Rhys Marshall arrived to play centre, not his usual hooking slot, as Rory Scannell yelped in pain when caught awkwardly under a heap of bodies. Not that positions really mattered anymore. Only Earls was left in the backline come the next lineout drive as everyone piled in before Dave O’Callaghan eventually breached the Ulster line.

Bleyendaal’s conversion made it 22-20 and it ended in more failure as Jackson hooked a drop goal attempt.

The win all but seals a home semi for Munster as perhaps the solitary Erasmus season continues to soar towards silverware. Dublin next.

Ulster go to Swansea in a fortnight but, really, they appear to be wandering around in circles.