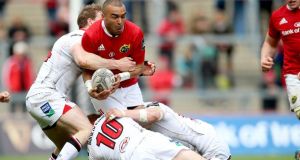 No underdogs here. Not even in the face of Saracens.

“Listen, whatever I say here we are up against it next week,” said the always composed Rassie Erasmus as Munster barely broke stride before switching focus to a Champions Cup semi-final at the Aviva Stadium.

“We will give ourselves a proper chance and see how far we have grown in nine months but I am not one of those guys who always want to be the underdog.

“I don’t believe in that, I don’t think we should be the underdogs when we go into games.”

This error-strewn victory over Ulster, only secured after Paddy Jackson’s rushed drop-goal attempt curled wide, was overshadowed by the looming spectre of the reigning European and English champions.

Ulster under Les Kiss remains a club in transition, or turmoil depending on your perspective, until Jono Gibbes and others arrive this summer. They can still reach the Pro12 playoffs by winning away to Ospreys two weeks from now but, yet again, the really serious rugby is being contested by other Irish provinces.

But back to Saracens. “I think they are a very complete team,” said Erasmus of Mark McCall’s team. “At the beginning it was just a great kicking game, which they still have, but they have individual guys who can attack and score from nothing. They have a lot of English guys now and other international guys who are in the prime of their career, 28 or 29, Schalk Burger is 31 and sometimes he doesn’t make the starting line-up.

“When Brendan Venter left me as assistant coach at the Stormers it was 2010 so it is seven years later so I think they have really evolved.”

That Venter was his assistant coach so long ago shows the 44-year-old’s stature in South African rugby. The Springboks desperately want Erasmus to come home, so however long or short his time in Munster becomes, they currently have one of the game’s great minds among them, planning for the latest monumental game in their history.

There are others who cannot afford to think about the future. On Saturday a local father named Keith Earls snatched the man-of-the-match award after finishing off a fine try created by Francis Saili breaking the muscular grip of Andrew Trimble.

Then there’s Peter O’Mahony and the departing Donnacha Ryan.

All three men are crucial now that Conor Murray’s battle to recover from a stinger, sustained against Wales on March 10th, is all but lost.

This is the same O’Mahony who two years ago was battered into the dirt as a South African-laden Saracens deconstructed an older Munster.

“That was stomach-churning, that defeat,” recalled O’Mahony. “As you know, we always pride ourselves on Europe and how we do in it and we let ourselves down over the past couple of years and that particular one was a tough one to take.

“But it is a different group now, it is a different animal,” O’Mahony continued. “We have learned a lot of lessons and we go about our business now a different way. Under the new coaching staff it’s – not that it is relaxed – we kind of just get on with the week, and we have put an emphasis on enjoying our rugby.”

The captain is not a man for wasting words so his passionate elaboration was a warning in itself to the Premiership champions.

“We are going to have our work seriously cut out, but you know, I have been in semi-final places before – not that we have beaten ourselves during the week, but you just let them pass you by and all of a sudden it is game day and they are short enough as it is. So you have to embrace it and enjoy it because these are the things you are going to look back on. Whether you win, lose or draw, you look back on these weekends because they are obviously the biggest weekends of your life and you want to look back on them with fond memories.”

None of these Munster men have done this before. Earls was on the 2009 team beaten by Leinster in Croke Park and he was a sub, along with Ryan, for the 2008 final, but the rest of those winners are gone. Sure, Jerry Flannery is studying in the Erasmus graduate school of coaching and the man himself brought the Cheetahs to a similar Currie Cup peak that Munster are about to scale.

So Erasmus knows how to cope with mini-disasters like losing Murray and Rory Scannell. Saili and Jaco Taute will join forces in an international midfield because Erasmus has very quickly and cleverly stocked up in key positions.

Take Jean Deysel replacing the injured Jean Kleyn. The 32-year-old Springbok flanker has come north to find smaller men than those he dominates back home.

But Saracens are a beastly proposition. George Kruis, the powerful young English lock, returned from injury on Sunday against Northampton. Schalk Burger started as well. He’s 34, by the way.

“We need to be right on the money to have any chance.”

Time flies. O’Mahony wants to savour it but the coach of these Munster hounds is an entirely different animal.

“I don’t think you have to be the underdog to win a game,” repeated Erasmus. “I don’t believe in that.”