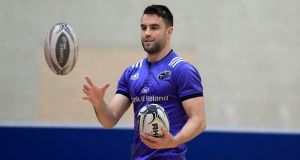 As is invariably the case in the European Champions Cup, the cream keeps rising. So it was that the four semi-finalists all took care of domestic matters over the weekend, as Leinster, Munster, Saracens and Clermont maintained their push for honours on two fronts before next weekend’s momentous collisions in the Aviva Stadium and Lyon’s Matmut Stadium de Gerland.

Munster’s gamble on selecting a relatively strong team helped earn them a typically taut 22-20 win over Ulster at Thomond Park on Saturday and thus secured their place in the Guinness Pro12 semi-finals. They now need just two more points to be sure of a home semi-final. But a further flurry of injuries compounded Conor Murray’s ongoing shoulder/nerve issue ahead of Saracens’ arrival at the Aviva Stadium on Saturday, with Rory Scannell’s ankle injury also making him very doubtful.

Murray hasn’t played in four weeks since suffering a shoulder injury in Ireland’s defeat to Wales, and when admitting the scrumhalf was very doubtful for the Saracens game, Rassie Erasmus also revealed that Murray had done no contact work in four weeks.

“It is just taking longer to heal,” said Erasmus. “There are so many things that still need to happen in his career. And even this year alone. Although I would really like to play him every Saturday, he is just not healing fast enough. It is as simple as that.”

Regarding Scannell, Erasmus was even more pessimistic. “I think it is very serious. We will probably only have clarity on that on Monday. It would be a worry.”

The prognosis on CJ Stander, who had a moon boot removed from the ankle injury he suffered in the quarter-final win over Toulouse on Saturday, looks altogether better.

Meanwhile, Leinster rested all bar three of the starting line-up from their quarter-final win over Wasps and still secured a Pro12 home semi-final with a thrilling 37-24 win away to champions Connacht in the Sportsground on Saturday.

Afterwards Leo Cullen confirmed that Jamie Heaslip, Rob Kearney and Jordi Murphy will remain sidelined, while he was unsure about the extent of Dave Kearney’s injury. But otherwise Leinster should be in a position to restore all his rested absentees.

With a five-day turnaround to Friday week’s ensuing Pro12 game against Glasgow, Cullen admitted that securing a home semi-final with two games remaining “gives us room for manoeuvre”.

Turning to the Clermont game, he added: “That’s where we want to be, in a semi-final in Europe. It is a tough challenge away to Clermont. We had to watch these games last year, which was painful for a lot of the Irish teams. It’s great to be back in a European semi-final. I’ve watched a lot of Clermont games over the last few weeks. It’s a team we obviously know well from over the years. The way they have evolved, they are a very, very powerful team. It’s going to be a great challenge.”

Clermont rested 10 of the starting team from the quarter-final line-up that accounted for Toulon for Saturday’s trip to Grenoble, yet still confirmed the latter’s relegation by running in nine tries in a 59-18 win to leave them second in the Top 14 and virtually assured of a semi-final in the French Championship as well.

On Sunday reigning European and English champions Saracens started only four of their European Cup quarter-final line-up that thrashed Glasgow, resting Owen Farrell, Maro Itoje, Mako Vunipola, Brad Barritt and Richard Wigglesworth amongst others, while Billy Vunipola and Chris Ashton were sprung from the bench, although George Kruis returned for the first time since December.

They trailed Northampton 25-12 with 10 minutes to go, but tries by Ashton and Marcelo Bosch helped them to a 27-25 win which kept them third in the Premiership and in the hunt for a home semi-final.