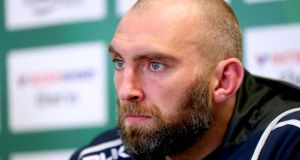 A reprise of last season’s extraordinary finale to the season and, indeed, the final itself, and thus one that is liable to get the home fires burning again. To give the collision an added sense of occasion on Easter weekend, the Sportsground will be packed to the rafters to acknowledge John Muldoon’s extraordinary achievement in reaching 300 competitive games for the province.

True, a little of the edge has been taken off this latest instalment by the pair of them having more or less secured their end-of-season Pro12 fate. Leinster appear bound for the semi-finals, and most probably at home, while Connacht are heading for the play-offs and a circuitous and decidedly hazardous route into next season’s European Champions Cup. But come kick-off, it assuredly won’t feel like that.

Derbies between these two seldom do, especially out west. Whereas Connacht haven’t beaten Leinster in Dublin since their win at Donnybrook in September 2002, they’ve generally risen to the occasion here.

Even back in the interpro days, Leinster were often mugged in Galway, and likewise in their all-conquering pomp, losing on five of their last eight visits to the Sportsground.

Connacht have won each of the last two corresponding fixtures by a point, their 7-6 win immediately after last season’s Six Nations constituting the first of four successive sell-outs at the Sportsground and wins which propelled them to the Pro12 final at Murrayfield. There, of course, they eclipsed Leinster 20-10.

Connacht need to regenerate some kind of comparable momentum to take them into the play-offs, where they might have to beat the seventh ranked sides from the Top 14 and Premiership away from home on successive weekends.

Last week’s win in Edinburgh was therefore timely, and while there’s always a chance that Muldoon’s landmark achievement could be a distraction, the sight of Leinster, unbeaten in 11 games, for their penultimate home game of the season ought to concentrate minds.

For their part, last week’s fine and opportunist if fortuitous win away to the Ospreys has given Leo Cullen elbow room nine days out from their daunting Champions Cup semi-final away to Clermont. Five points from their remaining three games would mathematically guarantee them of a place in the semi-finals.

In fact, if the Scarlets and Ulster both lost today, they could be more or less there come kick-off. Failing that, and more pertinently, Leinster need just seven more points to be assured of a home semi-final at the RDS, with the final already pencilled in for the Aviva Stadium.

Accordingly, Leinster make 11 changes in personnel from a week ago, with only Josh van der Flier retaining the same jersey as Rhys Ruddock shifts to number eight in leading the side, while Zane Kirchner reverts to full-back and Rory O’Loughlin to outside centre.

The likes of Jack McGrath, Sean Cronin, Tadhg Furlong, Devin Toner, Jack Conan, Joey Carbery, Robbie Henshaw and Isa Nacewa join Johnny Sexton and others on the sidelines. Leinster have a slightly callow look, especially on the bench, although that said the new frontrow are all internationals, as are three of the recalled backs, Luke McGrath, Noel Reid and Dave Kearney.

Jack Carty and Craig Ronaldson are re-instated in a strong-looking Connacht backline, albeit they’re still missing Matt Healy, while Dave Heffernan and Finlay Bealham return to the frontrow in the continuing absence of Tom McCartney and Ronan Loughney.

“It’s great to be back at the Sportsground in front of our home support after a number of weeks on the road,” says Pat Lam. “We are really looking forward to this game and the chance to put in a huge performance for ourselves, for our supporters and for John Muldoon on a special day for him.”