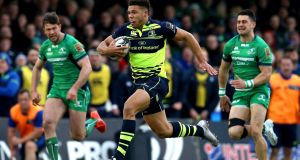 Leinster’s Adam Byrne takes flight on his way to scoring a try in the Guinness Pro 12 game against Connacht at the Sportsground in Galway. Photograph: Tommy Dickson/Inpho

A wild, wild night out west, but not in what was once the old, traditional sense. On a lovely spring night in Galway, this was modern-day Connacht fare at the Sportsground, thrills and spills galore, in every sense, as the home side lived by the sword but ultimately died by it too.

In a madcap, madly entertaining contest, the lead changed hands seven times before Leinster ran out almost anti-climactic winners in front of an enthralled if mostly disappointed crowd of 8,090. It was also, nonetheless, another compelling statement about Leinster’s strength in depth from what is assuredly the finest conveyor belt of indigenous talent in Europe.

Connacht ran it from everywhere. They kept passing out of the tackle or making tip-on passes. They had way more ball, more territory, made way more metres and line breaks, but also shot themselves in the foot.

A clinical Leinster, twice capitalising upon long-range intercept tries, won by five tries to two, thus extending their unbeaten run to 13 matches and in the process assuring themselves of a home semi-final at the RDS, where a win would mean a place in the final at the Aviva Stadium. The feel-good factor as the frontliners return to duty for a European Champions Cup semi-final will be palpable.

In some senses this was something of a dead rubber for Connacht, as they jostle with Cardiff for one of the two Pro 12 qualifying spots in the four-way playoffs to qualify for next season’s European Champions Cup.

But there was no way Connacht were going to lie down and have their bellies tickled by Leinster in front of a jampacked Sportsground or, again, vice versa, not least on the occasion of John Muldoon’s 300th competitive game for his native province.

Of the many tributes paid to Muldoon in a pre-match video on the big screen, long-time team-mate Ronan Loughney described him as: “The greatest leader I’ve ever had the pleasure of playing with.”

“Connacht is in his DNA,” said that other stalwart, and the province’s second most capped player, Michael Swift.

“I’m very proud of the people I represent and every time I go out on the pitch I know why I’m doing it,” Muldoon said. “I wouldn’t give this job up for everything. Once the body and the mind keep going, I’ll keep doing it.”

So Connacht kicked off and tore into the tackles, Jake Heenan meatily stopping Rhys Ruddock in his tracks and Kieran Marmion poached for the penalty. Craig Ronaldson landed it for a swift 3-0 lead.

Leinster’s response was even more impressive, Noel Reid putting some width on the ball to outflank the Connacht defence, Ruddock linking with Adam Byrne who offloaded in turn with Reid. From a penalty they went to the corner, and when a sequence of pick and goes was held came back to the blindside where Reid again outflanked the defence with a skip pass and Adam Byrne offloaded inside again for Zane Kirchner to touch down.

When Connacht mounted their first attack off a hard-earned turnover, they were a little too flat, and Ronaldson’s no-look pass was picked off by Adam Byrne for an intercept try from half-way which Ross Byrne converted. To compound home woes, Niyi Adeolokun hobbled off with what appeared to be a hamstring injury.

In a reprise of their opening three-pointer, Andrew Browne stopped Ross Molony in his tracks and Denis Buckley couldn’t be shifted off the ball; Ronaldson making it 12-6 in a helter-skelter start.

And so it continued. Tiernan O’Halloran made a superb break up the right, offloading inside when tackled by Dave Kearney where, crucially, Browne made the pick-up. Jack Carty, despite being left groggy by a big hit three phases earlier, then deftly weighted his cross kick into the arms of Danie Poolman, who sauntered around the posts.

Ronaldson’s conversion edged Connacht in front but straight away Marmion’s box kick was blocked by Josh van der Flier. Somehow, all the officials missed Muldoon being held illegally at the base of a ruck by Hayden Triggs and, despite his please, referee Ian Davies pinged Connacht for killing the ball and Ross Byrne kicked Leinster back in front.

But following a fine touch finder by Carty, Bundee Aki, hitherto quiet, bounced to his feet after a fine tackle on Rory O’Loughlin when Leinster ran scrum ball from deep to then pounce on the loose ball. The away defensive line having crept up offside, Ronaldson put Connacht back in front again.

Typical of the tit-for-tat exchanges, and how errors were being punished, a faulty Connacht lineout had Leinster on the attack once more. Luke McGrath, perhaps looking for a penalty, fired the ball into the kneeling Seán O’Brien but quick-wittedly latched onto the rebound to scamper clear before being tackled by Marmion. When Ross Byrne switched the point of attack, Reid’s looping skip pass enabled Van der Flier to put O’Loughlin over. This time the missed conversion was preceded by the departure of a groggy Marmion.

A breathless, finely balanced first half, in which the lead changed hands on five occasions, still had time for one more Ronaldson penalty, so leaving the half-time score 20-19 to Leinster.

Marmion would return for the second half, but Eoin McKeon would not, meaning the introduction of Naulia Dawai, who was immediately latching onto another wonderful offload by Muldoon as Connacht went through the phases against a vigilant Leinster defensive line. However, the latter came at a cost, as the desperately unlucky Dave Kearney was helped off after tackling Muldoon and then being twisted in the ensuing double collision. It looked like a bad injury to his left leg.

Connacht, emboldened by their half-time regrouping and with Aki now hungrier for the ball and O’Halloran unveiling his pace and box of tricks, kept knocking on the door. After another bout of passing out of the tackle and tip-ons, O’Halloran ran hard and freed his right hand in a double tackle by Barry Daly and James Tracy for an out-the-back offload to Eoin Griffin.

He passed inside to Marmion, who was hit hard by Luke McGrath but somehow held on. The cavalry arrived, and Browne trucked it up, Muldoon again stepped in at scrumhalf, for Finlay Bealham’s long skip pass to bounce into the hands of Dave Heffernan for a wonderful try.

Connacht, as is their wont, went for the jugular from the restart as Aki broke from deep, but his risky offload inside was picked off by Molony. His charge led to a controlled attack and a rumble by Van der Flier, before Ruddock rumbled over for Leinster’s bonus-point try as the lead exchanged hands for a seventh time, and Ross Byrne converted for a 27-24 lead.

Undeterred, Connacht ran the ball not so much from their own try-line as their own deadball line, Carty and Poolman shifting the ball on for O’Halloran to lead a thrilling break out in front of the Clan Terrace, who responded with a rousing chorus of The Fields. They looked set to score too when creating an overlap, but Adam Byrne picked off Carty’s attempted skip pass.

Leinster went to the corner, surprisingly, and O’Brien won a relieving penalty after Buckley tackled Peter Dooley. An inside pass gave Aki a break, before another bout of tip-on passes outflanked Leinster going left, but then when attempting a repeat going right Buckley’s pass missed his man and Daly kicked on, gathered, and scored. Ross Byrne’s conversion made it 34-24, and that took the sting out of both the home team and crowd alike.

Asked what it was like to make his 300th appearance for Connacht, Muldoon said pitchside: “I’d have given a few of them away for a ‘W’ tonight. Leinster have the squad to do the two this season.”